SEOUL, July 1 (Yonhap) -- Ruling People Power Party (PPP) Chairman Lee Jun-seok appeared at an airport to greet President Yoon Suk-yeol returning from a trip to Spain, spurring speculation he may try to seek help from the president in connection with sexual bribery allegations against him.

Lee's visit to Seoul Air Base in Seongnam, just south of Seoul, to welcome Yoon came about a week before the PPP's ethics committee meets to determine whether and how to discipline Lee over allegations that he received sexual services as a bribe about 10 years ago and attempted to cover it up.

Any punishment stronger than a warning could imperil Lee's political career a year after he took over the chairmanship and would push the PPP to elect a new leader.

Lee has claimed his innocence.

Earlier this week, Lee did not join other PPP leaders in sending Yoon off to Madrid for a summit of the North Atlantic Treaty Organization. The contrast could suggest Lee's situation has since become more desperate. 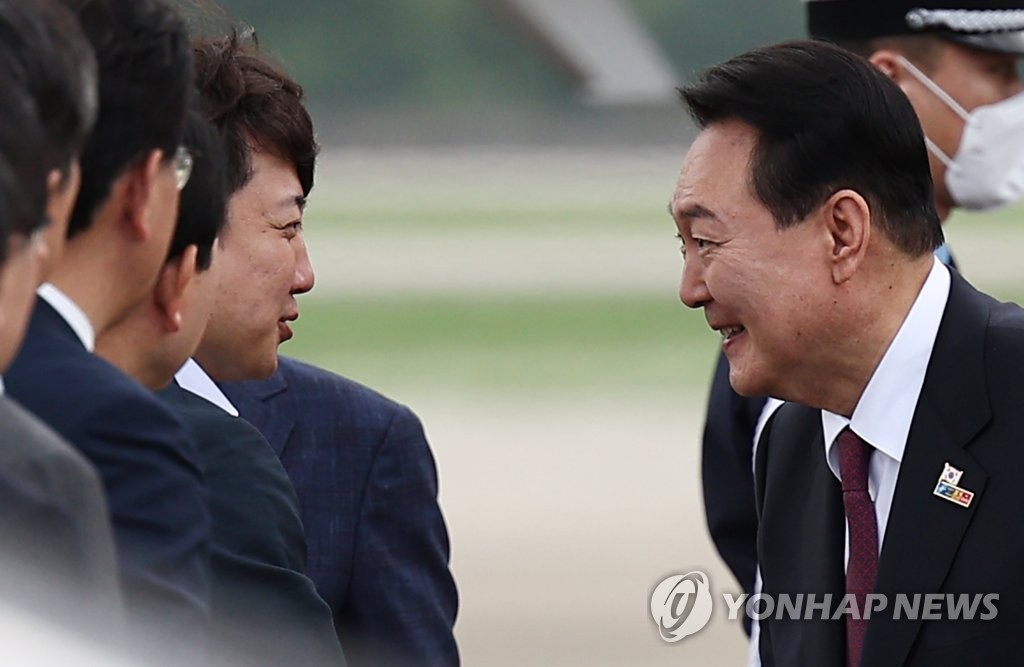 On Thursday, Lee's chief of staff, Rep. Park Sung-min, also resigned. Since Park has been considered a "bridge" between Yoon and Lee, his resignation sparked speculation that Yoon could be turning his back on Lee over the sexual bribery case.

The resignation was also seen as having driven Lee into a corner amid a power struggle over the party leadership between Lee and a pro-Yoon faction of lawmakers in the PPP.

Observers said Lee's airport reception can be interpreted as his gesture to patch up relations and seek Yoon's support over his efforts to control the party and overcome the sexual bribery allegations.

Yoon earlier declined to comment on the PPP's situation involving Lee, saying party issues are something that cannot be mentioned by the president.