SEOUL, July 1 (Yonhap) -- Former U.S. Defense Secretary James Mattis on Friday emphasized the importance of deterrence as a "primary" tool to maintain peace on the Korean Peninsula and help diplomats work to that end "from a position of strength."

Mattis, who led the Pentagon from January 2017 to December 2018 under former President Donald Trump's administration, attended a security forum in Seoul, as South Korea and the United States are striving to sharpen deterrence against North Korea's evolving nuclear and missile threats.

"We are now going to have to shift to a primary deterrence, not stopping diplomacy, not stopping dialogue. Of course, we want to continue that opportunity," he said at the forum organized by the Seoul Forum for International Affairs, the Center for Strategic and International Studies (CSIS), and the Korea Society.

"But we are going to have to turn to deterrence as our primary effort to keep the peace so our diplomats have time to try to solve this problem," he added. 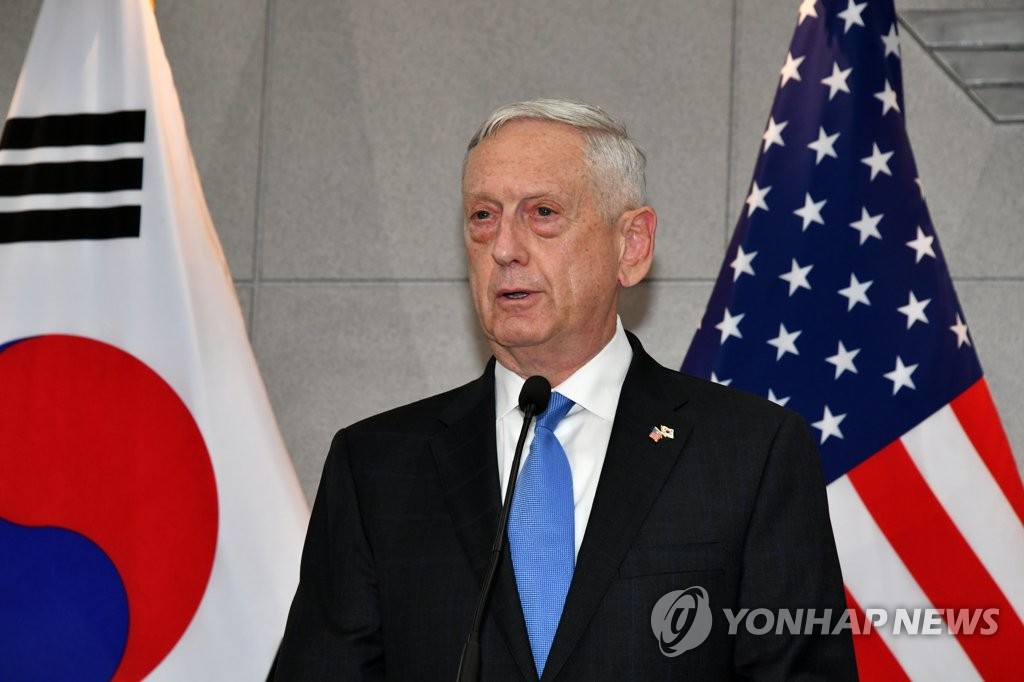 His remarks were in line with the ongoing efforts by the administrations of Presidents Yoon Suk-yeol and Joe Biden to reinforce America's extended deterrence, its stated commitment to using a full range of its military capabilities, including nuclear options, to defend its ally.

Deterrence efforts came amid the lingering talk of the need for South Korea to possess its own nuclear weapons or to seek the redeployment of U.S. tactical nuclear arms here to better counter North Korea's nuclear threats.

Mattis rejected the idea of the South being armed with nuclear arms, which he characterized as "horrible weapons."

"You don't need nuclear weapons on the peninsula to ensure an extended deterrence so long as there is trust between the ROK and the United States," he said, referring to South Korea by its official name, the Republic of Korea. "The location of the weapons is not important, and I think that (if there's) anything you can do to avoid having these weapons yourself, you should do so."

But to prevent other countries from developing their own nuclear arms, Mattis said Washington has to reassure its allies that "We are with them 100 percent.

"We must have a sufficient deterrent to ensure those horrible weapons are never employed," he said.

Asked about the preemptive strike option regarding North Korean threats, the former Marine general refused to comment but underscored the need to do "everything" to ensure diplomats can work "from a position of strength."

"We have never seen peace maintained through weakness. ... We must be strong and strong together," he said.

On China, Mattis pointed out that the North Atlantic Treaty Organization (NATO) portrayed China as posing "systemic challenges" in its latest strategic concept. But he said China is "not an adversary yet."

The former Pentagon chief also took a swipe at Russia's aggression as he outlined lessons from the conflict in Ukraine.

"Don't have incompetent generals in charge of your operations," he said. "In this campaign, the immoral, the tactically incompetent, operationally stupid and strategically foolish effort that has gone on there is a reminder that when you switch over to the military instruments, you better have some of your best and brightest down there in the ranks guiding what's going on."