SEOUL, July 1 (Yonhap) -- South Korean stocks dropped for a third day to hit a 20-month low Friday as investors dumped market heavyweights, such as chipmakers and chemicals, over recession woes. The Korean won rose against the U.S. dollar.

Trading volume was moderate at about 520 million shares worth some 8.5 trillion won (US$6.6 billion), with losers outnumbering gainers 638 to 238. 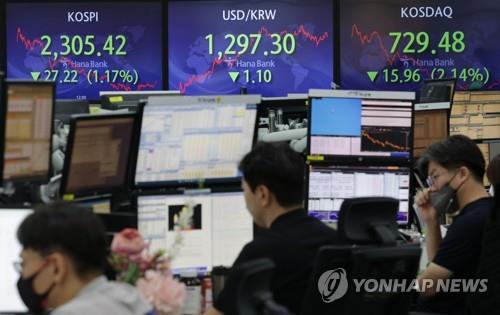 After opening higher, the stock index extended its losses, briefly dipping below the 2,300-point level.

Investors worry that the country's economic growth would sharply slow down.

South Korea's trade deficit hit a record high in the first half of the year amid the global energy crunch.

Investors are also worried that the U.S. core personal consumption expenditures (PCE) prices, a gauge of inflation growth, did not slow down enough in May to alleviate the market jitters about the Federal Reserve's aggressive rate hikes.

The local currency closed at 1,297.3 won against the U.S. dollar, up 1.1 won from the previous session's close.

Bond prices, which move inversely to yields, closed higher. The yield on three-year Treasurys plunged 11.1 basis points to 3.439 percent, and the return on the benchmark five-year government bond tumbled 15.8 basis points to 3.495 percent.