SEOUL, July 1 (Yonhap) -- The head of a key state-run economic think tank has offered to resume teaching at a local university, school officials said Friday, spurring speculation he may be preparing to resign after coming under pressure from top government officials to give up the position.

Hong Jang-pyo, president of Korea Development Institute (KDI), is one of the minister-level officials and heads of state-run institutions appointed by the previous government of President Moon Jae-in. Hong is also known as the key architect of Moon's trademark economic policy of "income-led growth" strategy.

In recent weeks, officials of the incumbent government and the ruling party have urged the previous administration people to leave voluntarily. Earlier this week, Prime Minister Han Duck-soo openly urged Hong to quit, saying it "does not make sense that the architect of income-driven growth is the head of the KDI."

On Friday, Hong was confirmed to have applied to open an economics class at Pukyong National University this fall. Hong has been on leave from the school following his appointment as Moon's chief presidential secretary for economic affairs in 2017.

The move was seen as a precursor to Hong's resignation as KDI chief.

Hong, whose term is set to end in May 2024, did not elaborate on his plans. "I'll speak soon after organizing my thoughts," he told Yonhap, saying he has not made a decision yet.

A university official said Hong is currently on leave, adding that another faculty member may take over the lecture if Hong does not return. 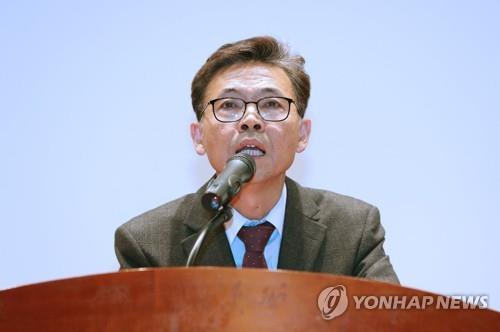