SEOUL, July 3 (Yonhap) -- With more people returning to the office amid easing of social distancing restrictions, instances of workplace harassment have also been on the rise, a survey showed Sunday.

According to a poll by Embrain Public, conducted between June 10 and 16 on 1,000 office workers aged 19 or older, 29.6 percent said they had experienced some form of workplace harassment within the past year.

In the same survey conducted in March this year, 23.5 percent had said they had suffered workplace harassment, such as verbal or physical abuse and bullying.

South Korea has lifted most social distancing rules in its efforts to return to pre-pandemic normalcy, and companies have brought their employees back to the office after some two years of having them work from home.

By industries, 34.2 percent of employees in the service industry said they had been harassed at work, compared to 22.1 percent in March.

The survey also showed that female workers were more vulnerable than their male counterparts, and temporary workers were exposed to more abuse than regular employees.

Of the 29.6 percent who responded they had been harassed at work, 39.5 percent said the degree of abuse at their workplace was "serious." 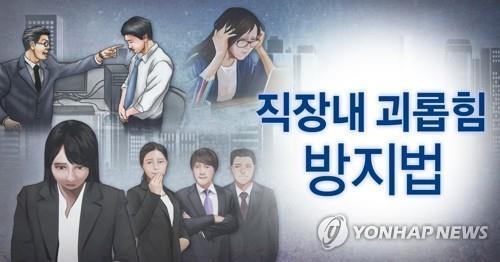 Also, 11.5 percent of those who had experienced workplace harassment said they had contemplated suicide.

The survey also showed that 67.6 percent of the people who had been harassed did not take any action, while 25.3 percent lodged a complaint and 23.6 percent quit.

Those polled said they felt their action would not improve the situation and that they also feared retribution.

According to the survey, 36.8 percent of harassment had been perpetrated by non-executive superiors at work, followed by 24.7 percent done by CEOs and executives.

The survey was commissioned by Gabjil 119, a pro-labor civic group that campaigns against workplace abuse, and the Public Workers Solidarity Foundation. It had a 95 percent confidence level and a margin of error of plus or minus 3.1 percentage points.

"Gabjil" is a Korean term referring to abusive conduct by people in positions of power toward those under their influence.