SEOUL, July 3 (Yonhap) -- South Korea plans to expand trade financing to bolster the country's exports in the second half, the finance minister said Sunday, amid growing concerns that export growth is likely to weaken amid heightened economic uncertainty.

"The government will increase trade financing by more than 40 trillion won (US$30 billion) than previously planned," Finance Minister Choo Kyung-ho said during a meeting with economic officials.

"It is hard to maintain optimistic views on exports in the second half, considering data and other circumstances," Choo said. 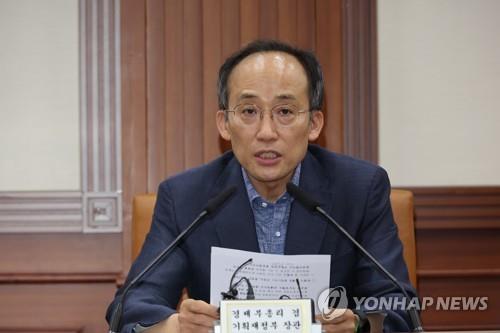 The government plans to set aside 301 trillion won for trade financing, up by 40 trillion won from the originally planned amount. Around 130 trillion won has been used in financial support for exporters in the first five months.

The government will focus on lessening the logistics burden, improving the visa system for foreign workers and hiring more youths to help ease a labor shortage facing exporters, Choo said.

South Korea's exports rose 5.4 percent on-year to US$57.73 billion in June on solid demand for chips and petroleum products, extending their gains to the 20th month. In the first half, exports grew 15.6 percent to $35.03 billion, the highest figure ever.

But the country suffered a trade deficit for the third straight month in June as imports grew at a faster pace than exports due to soaring fuel costs. In the first half, the trade deficit reached a record half-year high of $10.3 billion.

S. Korea to expand trade financing to prop up exports in H2

S. Korea to expand trade financing to prop up exports in H2