SEOUL, July 4 (Yonhap) -- Business leaders of South Korea and Japan called Monday for the leaders of the two countries to hold a summit at an early date to address pending bilateral issues and help restore economic ties.

The Federation of Korean Industries (FKI) and the Japan Business Federation, or Keidanren -- major business lobbies in the two countries -- made the joint call during their annual meeting that was resumed after a nearly three-year hiatus caused by the COVID-19 pandemic.

"We must upgrade the declaration, which looks to the future rather than the past, and emphasizes cooperation in all fields, to fit the present," FKI Chief Huh Chang-soo said in a speech during the Korea-Japan Business Council in Seoul, referring to the 1998 joint statement between then South Korean President Kim Dae-jung and then Japanese Prime Minister Keizo Obuchi.

The declaration paved the way for closer cooperation between the two neighbors at the time, as Obuchi expressed "keen remorse" and apologized for the damage and pain Japan inflicted on Koreans during its 1910-45 colonial rule of the Korean Peninsula.

Relations between the two countries remain badly frayed after Tokyo implemented export restrictions against Seoul over industrial materials vital to the South's tech sectors, on top of territory and other historical disputes stemming from Japan's colonial rule.

"We hope that a summit between our leaders will be held as soon as possible so that the pending issues can be resolved at once, such as abolishing the mutual export restrictions, resuming the currency swap and Korea's joining of the CPTPP," Huh said, referring to the Comprehensive and Progressive Agreement for Trans-Pacific Partnership. 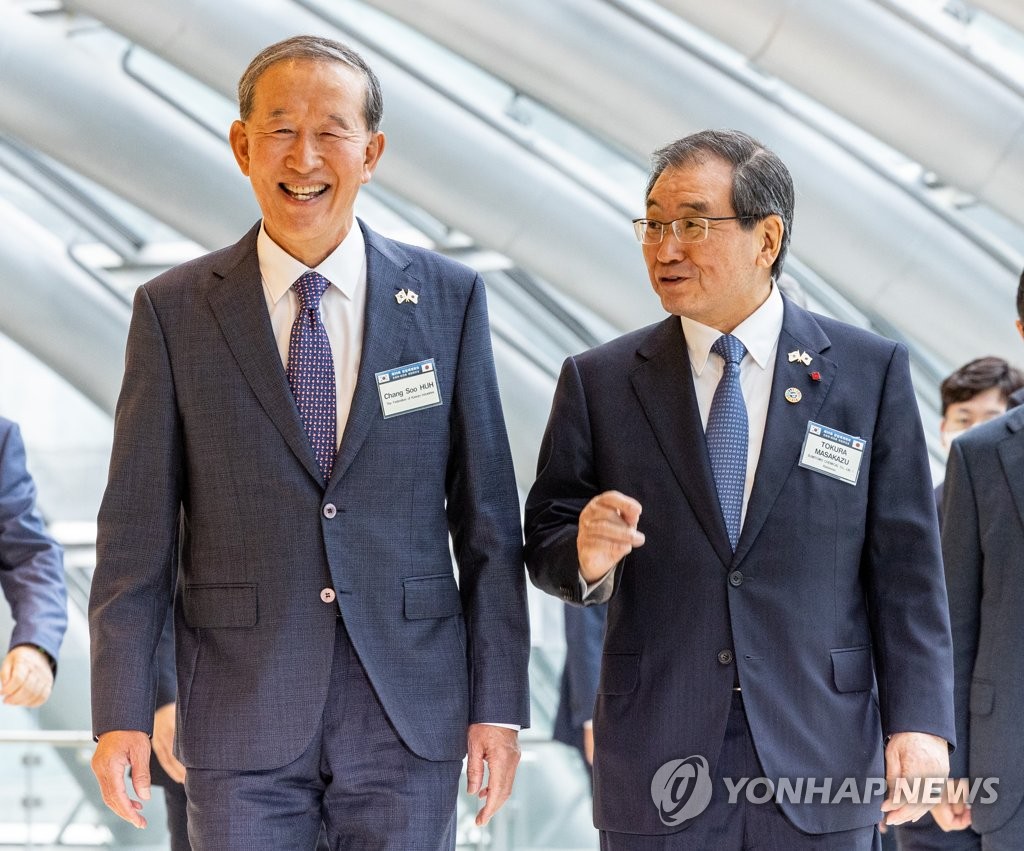 Masakazu Tokura, chief of Keidanren, expressed hope for high-level diplomatic meetings, including a summit, to take place between the two sides.

"The more difficult the relationship between Korea and Japan becomes, the more important it is to respect the spirit of the declaration and move forward together toward the future," Tokura said. 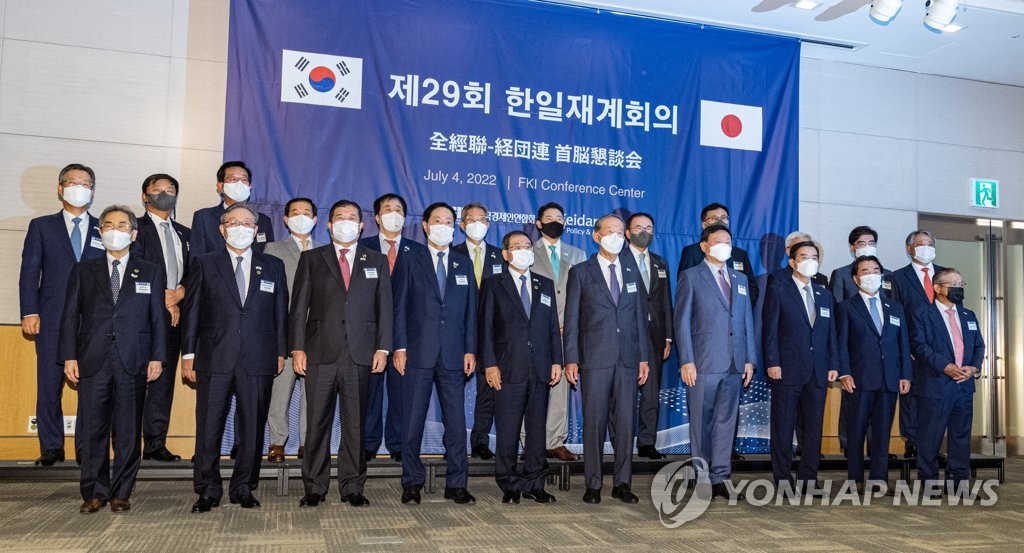 After the meeting, they adopted a joint statement outlining their commitments to elevating the relationship and highlighting the need for the private business sector to actively engage in efforts to deepen cooperation.

"It is very important to maintain and develop a good relationship between Korea and Japan, which share the values of democracy and market economy, amid a destabilizing international environment," the statement read.

"We share the view that this would not only benefit the development of the two countries, but also contribute to peace and stability in Northeast Asia," it said.

In light of the changing industry trend, the two sides also agreed to work closely together in green and digital transformation, cited as new areas with huge growth potential.

Underscoring the importance of trilateral cooperation among the two neighbors and the United States, their mutual ally, there was a proposal about forming a regular "business summit meeting" involving the three sides.

The business leaders also shared the need to resume the mutual visa waiver programs that remain suspended over COVID-19 concerns.

At Monday's meeting, the Korean participants also asked for support of the Japanese business circle for Seoul's push to join a major free trade agreement, the Comprehensive and Progressive Agreement for Trans-Pacific Partnership (CPTPP) involving 11 nations, including Japan.

Japan has been reluctant to South Korea's entry, citing Seoul's import ban on its seafood from the Fukushima area on radiation exposure concerns following the 2011 Fukushima nuclear power plant meltdown.

More than 20 top business leaders from the two countries took part in the event, including Lotte Group Chairman Shin Dong-bin and Kim Yoon, chairman of Samyang Holdings Corp. Presidents of top South Korean firms like Samsung Electronics, Hyundai Motor and POSCO Holdings were also among those present at the meeting.