SEOUL, July 4 (Yonhap) -- President Yoon Suk-yeol approved the appointments of his picks for education minister and chairman of the Joint Chiefs of Staff (JCS), while the nominee for health minister voluntarily resigned over allegations she diverted political funds for personal use.

Both Education Minister nominee Park Soon-ae and JSC Chairman nominee Army Gen. Kim Seung-kyum will be appointed without having undergone parliamentary confirmation hearings as the National Assembly has been in limbo for over a month, officials said.

Song and Yoon belonged to the same class of the Judicial Research and Training Institute.

The president further requested the National Assembly send a confirmation hearing report on Kim Joo-hyun, his pick for chief of the Financial Services Commission, by Friday, a step considered a formality before he can press ahead with appointing him.

Earlier in the day, Yoon's pick for health minister, Kim Seung-hee, resigned as nominee amid prosecutors' investigation into the political fund misuse allegations.

It marked the third withdrawal of Yoon's nominees since he took office in May.

Kim is under investigation by prosecutors for allegedly using her political funds when she was a lawmaker to pay for her husband's car insurance and car rental fee in violation of the Political Funds Act.

The nominee denied any wrongdoing, saying there was an accounting error but said she was stepping down to take responsibility over managerial errors. 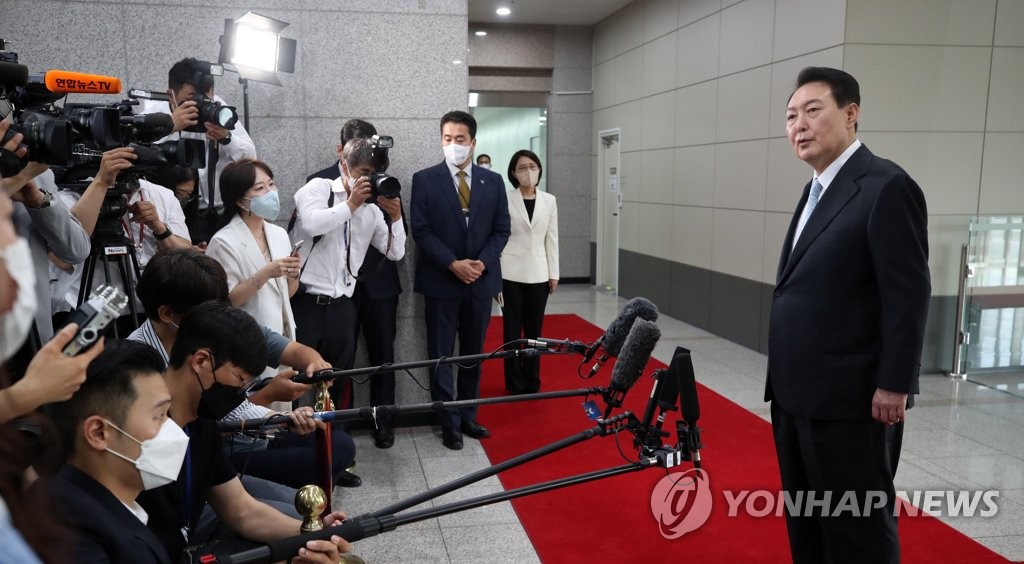 "When it comes to the biggest requirement for an appointed public official, I think public officials are people who handle the bread and butter issues of the nation, and are responsible for the people's wealth," Yoon told reporters earlier before the health minister nominee dropped out. "So I think expertise and competence in their area of responsibility are the most important."

Yoon went on to claim the people chosen under his administration "can't be compared" with those of the previous Moon Jae-in government in that regard and from an ethical standpoint as well.

"But our government is different, so I will have discussions with my aides and colleagues, because the minister nominees need to get to work quickly, and I plan to make a decision quickly at any rate," he said.

The appointments were one of his most pressing tasks following his return from Spain on Friday, where he attended the North Atlantic Treaty Organization summit on his first overseas trip as president.

"Even during the campaign, I didn't pay much attention to approval ratings. It doesn't mean much," Yoon said. "My work is for the people, and my only desire is to think solely about the people and work hard."