Talking with Sen. Rick Scott (R-FL), Lee asked for U.S. Congress' support for the development of the two countries' partnership into a "global comprehensive strategic alliance," according to the ministry.

"Minister Lee stressed the role of the alliance for regional peace and stability, and mentioned that the alliance is broadening its horizons into the value-based, technology and economic alliance from a security alliance," the ministry said in a press release

He also "emphasized the importance of the two countries working together for freedom and prosperity while sharing universal values, including freedom, democracy and human rights," it added.

Scott stressed the importance of establishing the "rules-based" international order and affirmed that to that end, the U.S. Congress will continue its support to ensure close cooperation between the allies, according to the ministry. 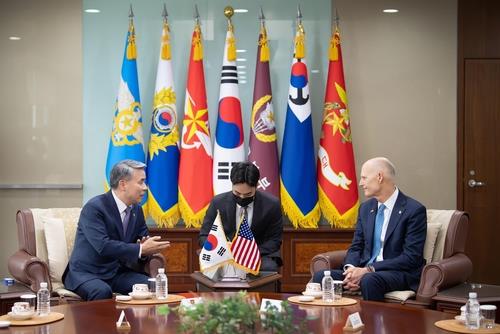