The album comes six months after "Dimension: Answer," the repackaged version of the band's first full-length album, in January.

"We'll show you more intense music and performances," member Ni-ki said during a media showcase in Seoul for the album set to hit music services at 6 p.m. "We have also prepared hard for a performance so we can hear that Enhypen never lets you down."

Formed through the music cable TV channel Mnet's audition program "I-Land" (2020), the septet debuted in November 2020 with its first EP, "Border: Day One." The group has since been on a steep rise, constantly breaking its own sales records.

Its first full album, "Dimension: Dilemma," sold 1.13 million copies in the first month of its release in October, and the repackaged version "Dimension: Answer" sold 510,000 copies. 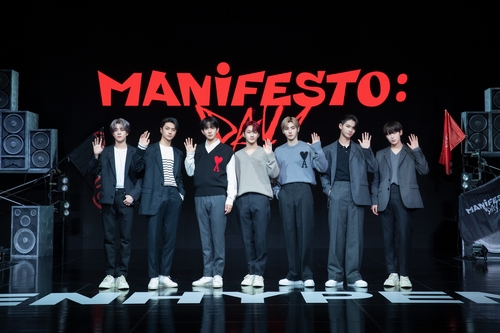 In its previous "Border" and "Dimension" album series, the rookie band has depicted a story of seven boys who gradually realize their own missions, feeling complex emotions after making their debut as idols.

The upcoming album is about the boys determining not to live the way others tell them to any longer and to find their own answers, according to the band.

"We expressed our determination to live our lives according to our will without being swayed by the world in songs of various genres," team leader Jungwon said.

Jay said, "We were greatly happy to win the title of a million-selling group, but I felt that this success was not achieved only by our abilities and efforts. It will be an album that proves we deserve to be loved."

The EP consists of six tracks led by the main single "Future Perfect (Pass the MIC)." Five other songs are "Walk the Line," "ParadoXXX Invasion," "TFW," "Shout Out" and "Foreshadow."

"Future Perfect (Pass the MIC)" is a Chicago drill hip-hop track, a relatively unfamiliar genre in the K-pop scene. Its lyrics are about the seven boys declaring to the same generation that they will move forward first and go together.

Sunghoon said the boys in the song hand over their microphones to their peers in the same generation and shout about having to grow embers for their own future together.

Jungwon explained the song's title was named after the future perfect tense in English grammar. "So, it delivers a hopeful message on top of its intense melody and lyrics," he added.

Jake showed his affection for the song, saying he liked the song as soon as he heard it for the first time. "I felt it is awesome, particularly because the refrain is very intense."

Heeseung said all seven bandmates have grown while working on the song.

"We did the unfamiliar genre called 'Chicago drill' for the first time and tried a rap for the first time since our debut. We also improved our skills in the process of pondering over how to create synergy (between the members) in various ways."

During the media showcase, Enhypen showcased powerful dance moves themed around the microphone in perfect sync, moving relentlessly all throughout the up-tempo song.

Jungwon said the song's tempo is so fast that it requires lots of physical strength to perform the track. "But I practiced hard, trying to imagine myself performing the song perfectly on stage in front of Engenes," he said, referring to the name of the group's fandom, Engene.

Sunghoon said the track probably requires the most physical strength among all the choreographies for the band's songs, let alone the difficulty of its dance moves.

As a group that made its debut during the COVID-19 pandemic, when there were many restrictions on in-person concerts and performances, Enhypen did not hide its expectations for performing live in front of fans on upcoming television music programs.

"We had a chance to perform in front of 30,000 spectators during a recent show in Germany, and their cheers and energy were great. So, just the thought of meeting fans in person makes my heart flutter," Ni-ki said. "We prepared really hard for our fans, so please look forward to our upcoming activities for the album," he added.