SEOUL, July 4 (Yonhap) -- SK E&S Co., a South Korean natural gas provider, is planning to open an office in London to push for an expansion in Europe, the world's largest economic bloc, where the energy market is being reshaped amid the ongoing Russia-Ukraine conflict, the company's head said Monday.

"In the past, the European gas market had almost been separated from those in Asia and the United States, but it's a different situation now ... there has been a change in not only the European market but globally, due to the COVID-19 pandemic and the Russia-Ukraine war," Yu Jeong-joon, vice chair and co-CEO of SK E&S, said in an in-house interview published on the company's website.

"The European, American and Asian markets influence each other, and offer opportunities and risks of arbitrage at the same time," Yu said.

"Without understanding Europe, we cannot be a good market participant, or a global player ... We're hoping that opening the London office would do its part in this regard," he said. 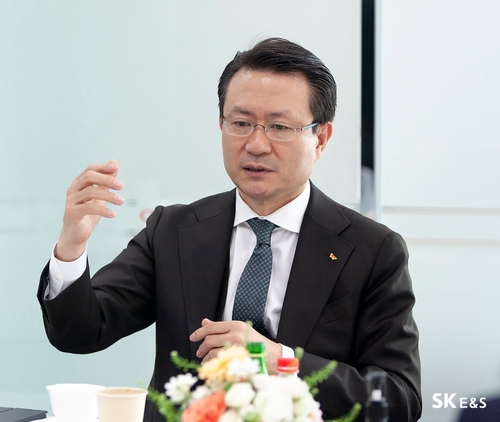 SK E&S, the largest privately-owned liquefied natural gas (LNG) provider in South Korea under No. 2 conglomerate SK Group, has mainly engaged in the LNG business in the Asian market due to the limitations in transportation.

The deepening energy crisis in Europe, triggered by Moscow's series of cuts in gas exports to Europe in a tit-for-tat move against European sanctions over its invasion of Ukraine, may provide new opportunities for energy companies, like SK E&S, to expand its foothold in Europe, according to Yu.

Yu noted natural gas is a "realistic alternative" energy to renewable energy to achieve net zero carbon emission goals, since it emits about 40 percent of greenhouse gas compared with coal, and its supply chain is more consistent and stable than renewable energy.

"LNG demand is expected to continue for some time. SK E&S aims to achieve 10 million tons of LNG supply by 2025 and, as an interim stage, increase the supply by 50 percent from the current level to 6 million tons next year," Yu said.