SEOUL, July 4 (Yonhap) -- President Yoon Suk-yeol met with a group of Japanese business leaders on Monday and called for joint efforts for a future-oriented bilateral relationship, his office said.

Yoon met with members of the Japan Business Federation, a major business lobby, at his office and discussed ways to increase business and people-to-people exchanges between the two countries.

The two sides also talked about the results of an annual meeting between the Japan Business Federation and the Federation of Korean Industries, which took place in Seoul earlier in the day. 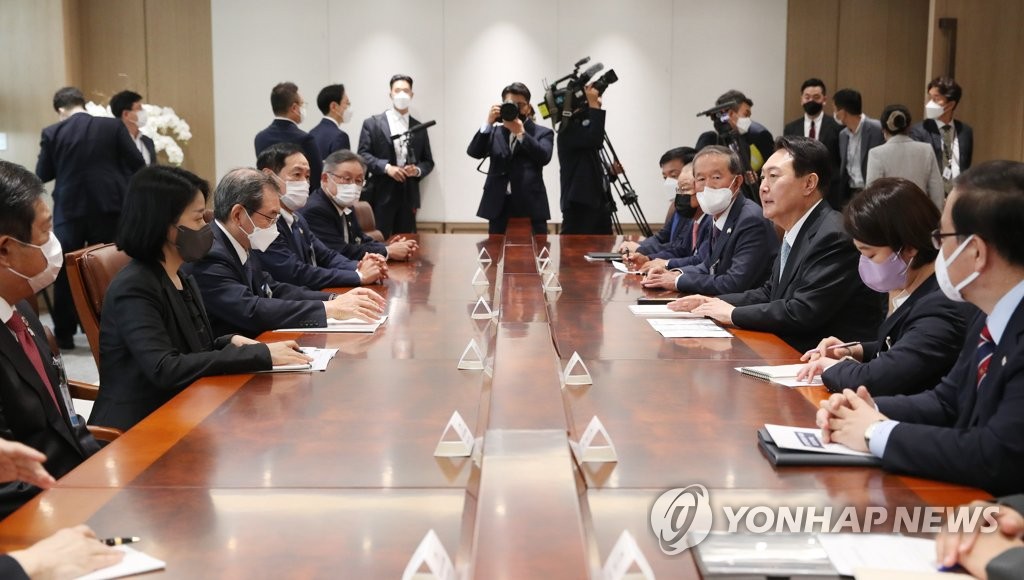 "President Yoon said the two countries should pool their strength and wisdom to build a future-oriented cooperative relationship, and in particular asked that the two countries' businesspeople continue to communicate so as to expand the boundaries of cooperation in the coming era of economic security," the presidential office said.

"He also said the two governments will have to work together to resolve pending issues between the two countries," it said.

Masakazu Tokura, chief of the Japanese federation, called the two countries "important neighbors" that share a close and mutually beneficial relationship across the political, economic and culture spheres.

He also promised the Japanese business community's continued efforts to maintain and develop friendly relations between their economic sectors, the presidential office said.

Yoon calls for joint efforts with Japan for future-oriented relationship

Yoon calls for joint efforts with Japan for future-oriented relationship