SEOUL, July 5 (Yonhap) -- South Korea will investigate Eastar Jet Co. to see if there was any violation in the process of the budget carrier having obtained government approval last year for flight resumptions, the transport ministry said Tuesday.

Eastar's financial statements published in the Financial Supervisory Service's regulatory filing system on May 13 showed the company was in complete capital erosion at the end of 2021, the ministry said in a statement.

The ministry said it will thoroughly look into whether there was any violation in the process of Eastar's achieving AOC approval. 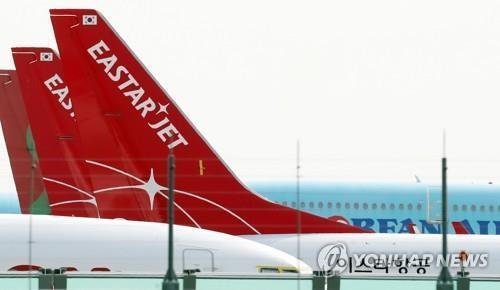 In response, Eastar said the documents submitted to the ministry in November were based on financial figures, which had been available as of the end of May 2020.

But Eastar found unexpected losses in its 2021 financial statements when the accounting system was recovered in February this year following the system's monthslong suspension due to cost issues, the company said in a statement.

"We will fully explain what brought the differences in the annual financial figures to the ministry," a company spokesperson said.

Eastar graduated from the court-led debt-rescheduling program in March, one year after it was placed under court receivership amid the COVID-19 pandemic.

Eastar applied for court receivership in January 2021 as it had failed to find a strategic investor since July 2020, when Jeju Air Co., the country's biggest low-cost carrier, scrapped its plan to acquire Eastar amid the pandemic.

Eastar has suspended most of its flights on domestic and international routes since March 2020, and its AOC became ineffective in May.