The growth rate is much higher than the 19.7 percent gain in the total assets of the country's top 30 business groups to 1,853 trillion won (US$1.02 trillion) over the cited period.

The figure covers assets held by their non-financial affiliates and capital owned by their financial units.

The five largest groups' assets accounted for 59.7 percent of the total, up from 51.7 percent from the end of 2012, just before the inauguration of the Park Geun-hye administration.

In particular, the ratio surged from 51.7 percent in 2012 to 59.4 percent in 2016, months before Park was impeached and imprisoned for far-reaching corruption charges and an influence-peddling scandal.

In contrast to the spike in the top five's assets, the remaining 25 business groups saw their assets tumbling 25.5 percent to 666.8 trillion won over the period.

No. 1 conglomerate Samsung posted the highest jump in assets, with them going up 58.1 percent from 306.1 trillion won to 483.9 trillion won over the cited period. Samsung Electronics Co., the world's leading smartphone and memory chip maker, belongs to the conglomerate. 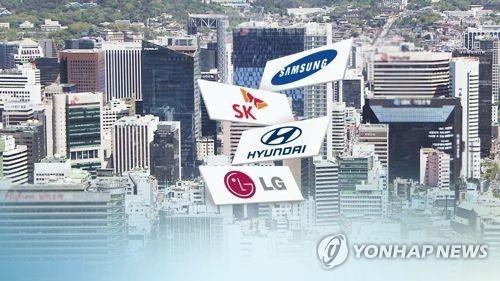