SEJONG, July 5 (Yonhap) -- South Korea will expand its generation of nuclear power to 30 percent of its total energy creation by 2030 as part of efforts to boost energy security and better meet carbon neutrality goals, the industry ministry said Tuesday.

According to the comprehensive energy plan announced Tuesday, the government will resume the construction of the Shin-Hanul No. 3 and No. 4 nuclear reactors, and continue operations of existing reactors, which is expected to increase the country's nuclear energy ratio to over 30 percent by 2030.

The government also seeks to export 10 nuclear reactors by 2030 and to earmark 400 billion won (US$308 million) for the development of small modular reactors (SMR), according to the Ministry of Trade, Industry and Energy.

The government will announce a plan on the right mix of renewable energy resources by the end of this year in an effort to achieve carbon neutrality, the ministry added.

Currently, South Korea operates 20 out of its 24 nuclear reactors. The previous government had sought to decrease the number of plants in operation to 17 by 2034. 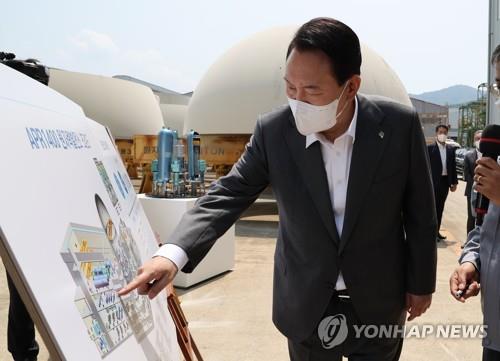 In an effort to strengthen energy security, the government vowed to increase the country's strategic reserves for major energy resources and to deepen international cooperation in a move to diversify its import channels of key industry items.

The government will push to set up a special law on the establishment of a "control tower" and an early warning system on the national energy security, according to the ministry.

"If the plans are implemented without a hitch, our dependence on imported fossil fuels is expected to be reduced to around 60 percent in 2030 from last year's 81.8 percent," the ministry said.