SEOUL, July 5 (Yonhap) -- South Korean battery makers are expected to show mixed quarterly results in the second quarter, with Samsung SDI Co. likely to be the only one with profit growth, as rising raw materials costs and auto chip shortages continue to weigh down on their profitability.

Samsung SDI is estimated to have posted a 37.8 percent on-year increase in operating profit to 406.9 billion won (US$313.8 million) in the second quarter, according to the market consensus by local brokerage houses in a survey compiled by Yonhap Infomax, the financial news arm of Yonhap News Agency.

"In particular, the profitability will likely have improved from the first quarter due to the sales growth in high value-added products," Shin Seok-hwan, a Daishin Securities analyst said, referring to SDI's flagship Gen5 battery.

LG Energy Solution Ltd., the world's second-largest player, is expected to have generated 221.6 billion won in operating income, down 69.4 percent from a year earlier.

Analysts said the shipments of auto batteries likely came below expectations amid the semiconductor shortages for automobiles and a sharp rise in raw material prices.

The losses, however, largely come from one-off costs, as SK On has been aggressive in foreign expansion and facility investment, and the company could make a turnaround in the early quarters of next year, according to analysts. 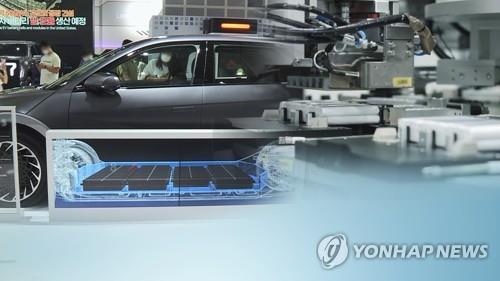