The 18-year-old catcher for Gyeonggi Commerce High School in Seoul took an important step toward realizing that dream Monday, when he signed with the Kansas City Royals.

As is the rite of passage in baseball, Um will begin his journey in the low rungs of minor league baseball and will have to work his way up to reach the ultimate stage. 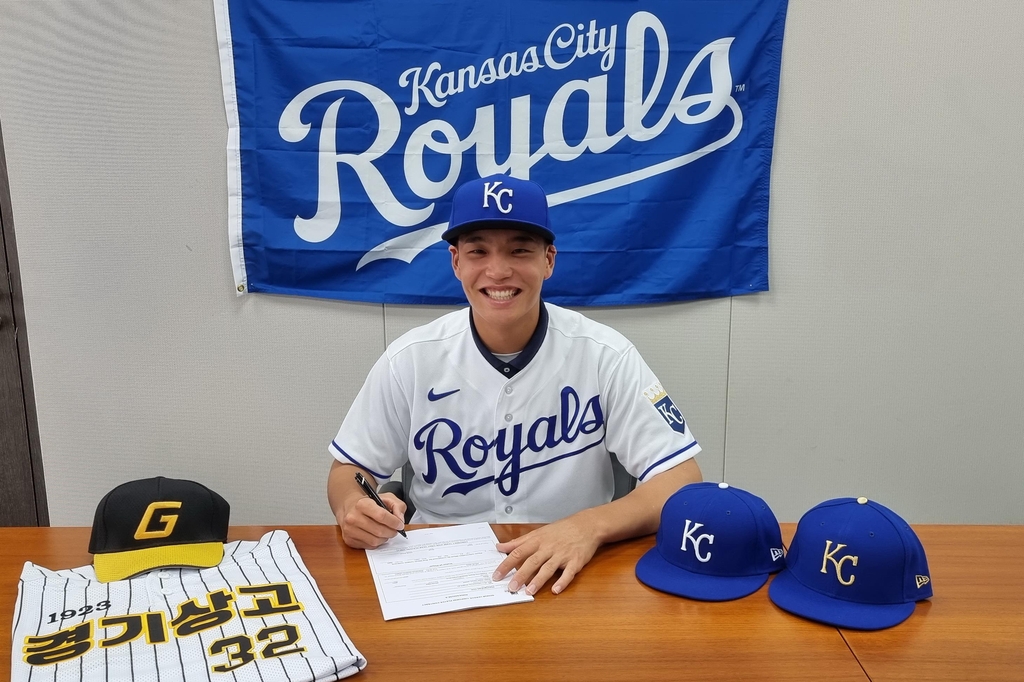 Um is the first South Korean amateur catcher in 11 years to sign with a major league club. None of his predecessors reached the majors and, regardless of positions, very few South Korean high school players have made it to the majors after starting out in the minors as teen prospects.

"Rather than having any fears, I am just looking forward to going (to the United States) and having that firsthand experience," Um told Yonhap News Agency in a phone interview Tuesday. "I am the type of person who likes new challenges. I understand people may feel afraid or feel burdened (by expectations), but I just want to enjoy the challenge."

Um has been regarded as one of South Korea's top catching prospects among high school seniors this year. Had he stayed put, Um would most likely have been an early-round choice in the Korea Baseball Organization (KBO) draft in September. 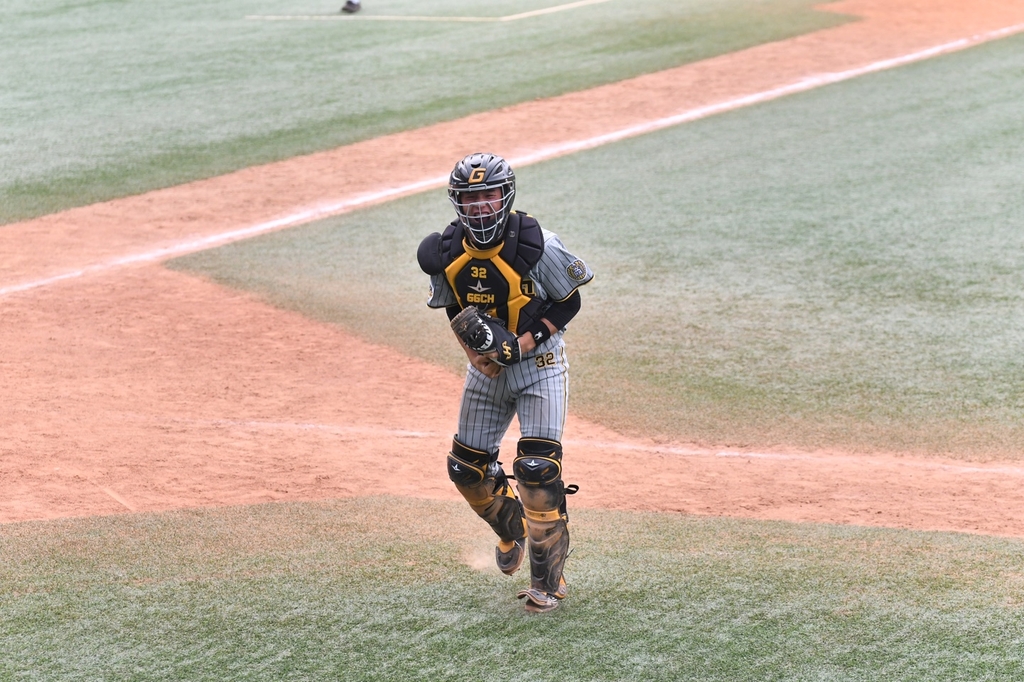 But once the Royals, which had been keeping an eye on Um since he was in middle school, made him an offer, Um didn't have to think long and hard about his immediate playing future, saying, "I decided I should pounce on the opportunity (to go to the U.S.) when it came up."

Um is a complete package. So far this year, Um has batted .452/.500/.694 with three home runs and 25 RBIs in 15 games. He has logged 101 2/3 innings behind the plate and has thrown out 70 percent of would-be base stealers. Um gunning down helpless runners with that cannon arm of his is quite a sight to behold.

"I think (the Royals) liked my defense and also the fact that I've been swinging the ball well of late," Um said. "And I think they also liked my passion for baseball."

After moving to the U.S. minor leagues, South Korean prospects tend to struggle more off the field with cultural adjustments than with baseball itself on the field. The game of baseball doesn't really change much, if at all, in the grand scheme of things but having to communicate in a new language and learn a new culture represents a whole new challenge.

Such a transition can be particularly difficult for catchers, who constantly have to talk with their pitchers and coaching staff about game planning and strategies. Latin American prospects whose first language isn't English encounter much of the same problems. But Um will go in more prepared than others. An informed baseball source told Yonhap News Agency that Um is proficient in English, able to carry out basic conversations while showing "a high level" of listening comprehension.

"I grew up watching a lot of films (in English), and I was exposed to the new language organically," Um said. "I've always been fond of the American culture, and I think it has helped that I've watched a lot of films."

For the Um family, the apple hasn't fallen too far from the tree. Um's father, Um Jong-soo, was a catcher for the Atlanta Braves' Class A-Advanced affiliate in Myrtle Beach, South Carolina, in 2001, appearing in 24 games as a 27-year-old. The Ums are now the first South Korean father-son duo to sign with a major league organization.

The senior Um is a coach at his son's school and works with backstops. The junior Um said he has been trying to pick his father's brains about what it is like to play and live in America.

"He told me not to get too carried away with excitement, and to keep doing the things I've always been doing," the son said of his father's advice after signing with the Royals. "He said I should look at this as a fresh start."

The Royals boast one of the best catchers of this generation in Salvador Perez, a five-time Gold Glove winner and a four-time Silver Slugger Award winner. In 2021, he led the majors with 48 home runs and 121 RBIs, and also threw out 44 percent of would-be stealers, the highest rate in the bigs. 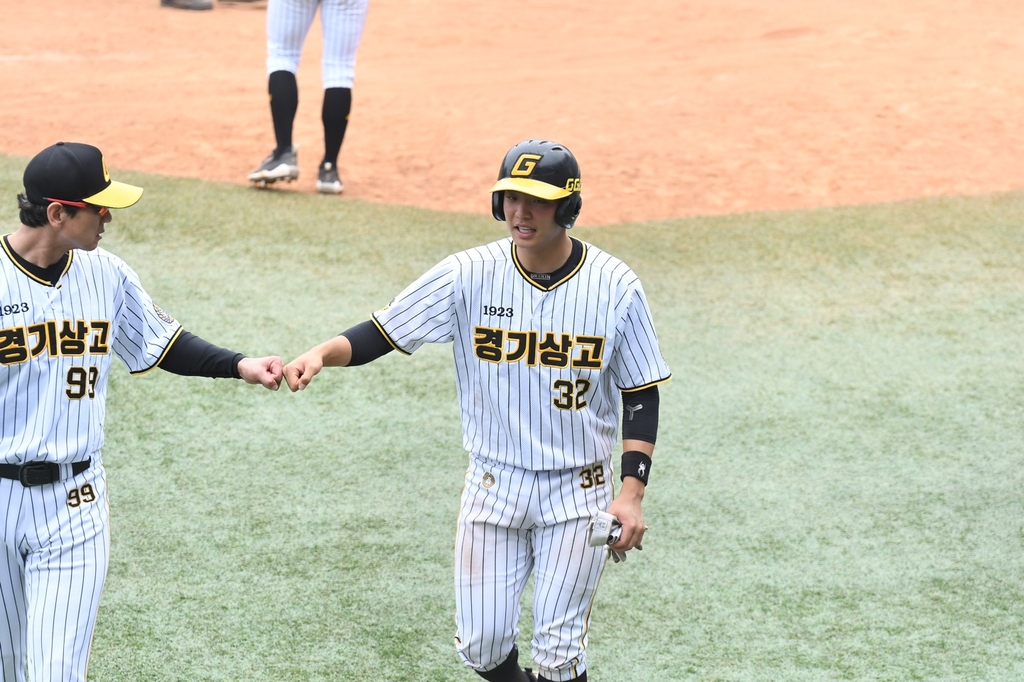 Um said he doesn't have one particular role model in the majors because, "I like watching as many catchers as I can."

Um has previously mentioned he looks up to two KBO catchers: Yang Eui-ji of the NC Dinos and Kang Min-ho of the Samsung Lions. Both are two-way stars who can do damage with their bats, and provide strong defense and game calling.

"I want to learn how to play with poise and composure," Um said. "There's a lot to learn from the way they handle different in-game situations without panicking."

Um said he felt "proud" to have signed with a major league club but added his journey is just beginning.

"It's amazing to see my dream become a reality," he said. "I am going to keep working hard to get to the big leagues someday."