SEOUL, July 5 (Yonhap) -- The ruling People Power Party (PPP) continued to ramp up pressure on high-level officials appointed by the previous Moon Jae-in administration, urging them to give up their positions for the incumbent government's stable operation.

In recent weeks, officials of the incumbent government and the ruling party have urged people from the previous administration to leave voluntarily. Last week, Prime Minister Han Duck-soo called for the head of South Korea's key economic think tank, the Korea Development Institute (KDI), to step down. 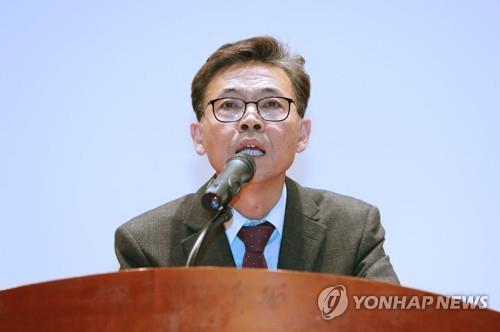 On Tuesday, Rep. Kim Gi-hyeon, former floor leader of the PPP, joined the move. In a Facebook post, Kim openly urged minister-level officials and heads of state-run institutions appointed by the previous government to quit.

"The presence of people appointed by the previous government at public institutions and state-run companies -- that should be helping the newly elected Yoon Suk-yeol administration -- is substantially weakening its power to run state affairs," the lawmaker said.

Kim criticized the main opposition Democratic Party (DP) for pushing ahead with the appointment of these officials near the end of Moon's term and urged the appointed officials to have some "political morality."

In a Facebook post updated Tuesday, Park stressed that refusing to resign can be seen as "disobeying" the results of the presidential election.

"It is political greed to not make it possible for the president, elected by the people's wish, to play his role," Park wrote.

The PPP also took issue with the main opposition's recent move to create an internal commission, whose possible agenda includes reviewing whether the pressure on these appointed officials is fair.