The quartet made a full-group comeback for the first time in more than two years Tuesday with its fourth EP, "Holiday."

"I'm happy and pleased," Seungyoon, leader of the eight-year-old band, said during a press conference to promote the upcoming album at the headquarters of its agency, YG Entertainment. "Mino and I have worked hard as solo artists, but it feels different to work as a whole group together with other bandmates," he said.

The last release involving all four members was in April 2020, with the band's third full-length album, "Remember." Since then, Seungyoon and Mino have been busy with their solo activities while the two elder members -- Jinwoo and Seunghoon -- have been away to complete mandatory military service duties.

After the new album's release, the band is expected to experience another hiatus, as Seungyoon and Mino face enlistment. 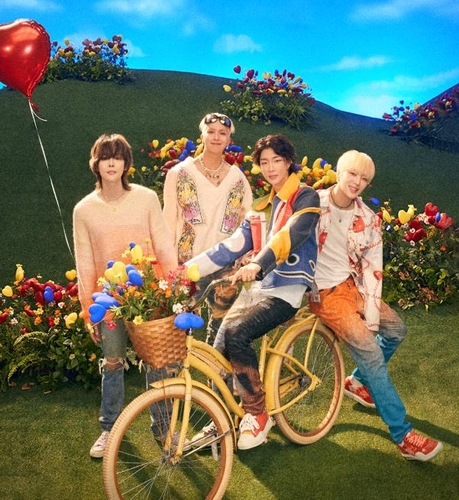 Seungyoon expressed hope fans will not feel sad or think too much about some members' absence, since the band will continue to work as a group and individual artists for a long time.

"I take it as the starting point to open the second chapter of WINNER's career," he said. "If I say the four members had walked hard the same path together in the first chapter, the roads would now unfold in four branches. In my head, I pictured ourselves expanding the radius of individual activities that each member can do and creating more synergy when we are together. So I hope fans will not be too sad or disappointed because of this."

Jinwoo said he had a good time in the military as a person.

"I had so many complex things to think about at that time, and now it feels like they have been sorted out. So, I want to say that this isn't too bad."

As indicated in its title, "Holiday" is full of WINNER's own uplifting vibes.

"Even if we're in the ninth year of our career, I think it's cooler to entertain people with lighthearted and uplifting songs," Seungyoon said.

The band was formed in 2013 by YG through Mnet's survival program "WIN: Who Is Next" and debuted the following year with its first full-length album, "2014 S/S." WINNER is known for songs like "Really Really," "Love Me Love Me" and "Millions."

"As you can feel from the album's title, this album contains tracks that can comfort and heal you," he said, adding fans and listeners will feel like they are enjoying a holiday, at least when they listen to the songs.

The lead track "I Love U" is about a man's confession to his love interest.

"It's a song that contains the desire to confidently cry out 'I love you.' Although the expression 'I love you' is very common and anyone can say it, I felt the world has become harsh these days. But the song says we want to confidently confess our love in this kind of world."

"Holiday" is set to hit online music services at 6 p.m.