SEOUL, July 5 (Yonhap) -- Parts of the Seoul metropolitan area have recently come under attack by swarms of a previously unheard-of insect, named lovebug, with residents suffering inconvenience as the bugs get into their homes.

Swarms of lovebugs, known as a species of march fly, have suddenly appeared in northwestern Seoul and adjoining areas of Goyang, a Gyeonggi Province city, since about a month ago, causing inconvenience to residents. 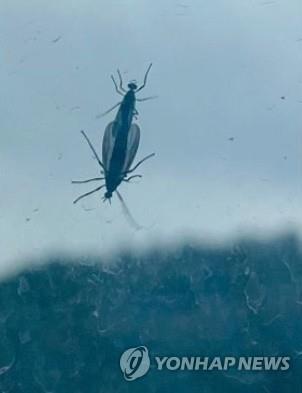 According to social media posts, many residents in the areas haunted by the lovebugs complain of being unable to open their windows for fear of the creepy insects getting inside, despite the suffocating heat wave. Some residents also said their children are very frightened by the appearance of the lovebugs, asking for ideas to get rid of them.

The offices of northwestern Seoul wards, such as Eunpyeong and Seodaemun, and Goyang city have been flooded with calls from residents asking for disinfection measures against the lovebugs. Municipal officials speculate that the lovebugs may have originated from mountains in Eunpyeong Ward and the recent surge in their numbers may be related to the protracted spell of wet and rainy weather last month.

A laboratory affiliated with the Ministry of Environment said the lovebugs appearing in parts of the capital area are believed to be the honeymoon fly or double-headed bug, as they are often seen in pairs or "stuck" together due to mating. The lab presumes that the lovebugs are homegrown rather than an exotic import, though genetic analysis results are expected to come later this week.

But the lab stresses that lovebugs can be regarded as beneficial insects rather than harmful insects, saying the characteristics of the lovebugs and plecia nearctica found in parts of Central America and the southeastern United States may be similar.

The lovebugs are 6 to 8 mm in length and live for 72 to 92 hours. In the U.S., they are often found near highways and are a nuisance and hindrance to drivers. Unlike common perception, however, the lovebugs are nonthreatening to humans because they do not bite or sting. Their larvae are also known to act as a decomposer in the natural habitat by converting plant materials into nutrients.

Thus, some entomologists here are raising questions about the ongoing disinfection efforts against the lovebugs, noting they tend to perish quickly in dry weather and are expected to disappear naturally about two weeks after the rainy season ends. 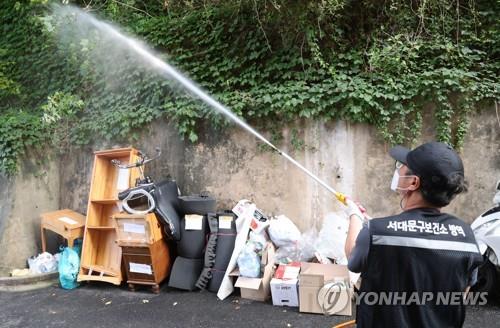