(ATTN: UPDATES with more details in paras 12-13)
By Song Sang-ho

President Yoon Suk-yeol and top commanders discussed the issue and other key defense priorities during their meeting at the Gyeryongdae military headquarters, 160 kilometers south of Seoul. He presided over the top brass' session for the first time since assuming office in May.

The push for the envisioned unit comes as the South is striving to sharpen deterrence following a series of North Korea's ballistic missile launches and preparations for what would be its seventh nuclear test. 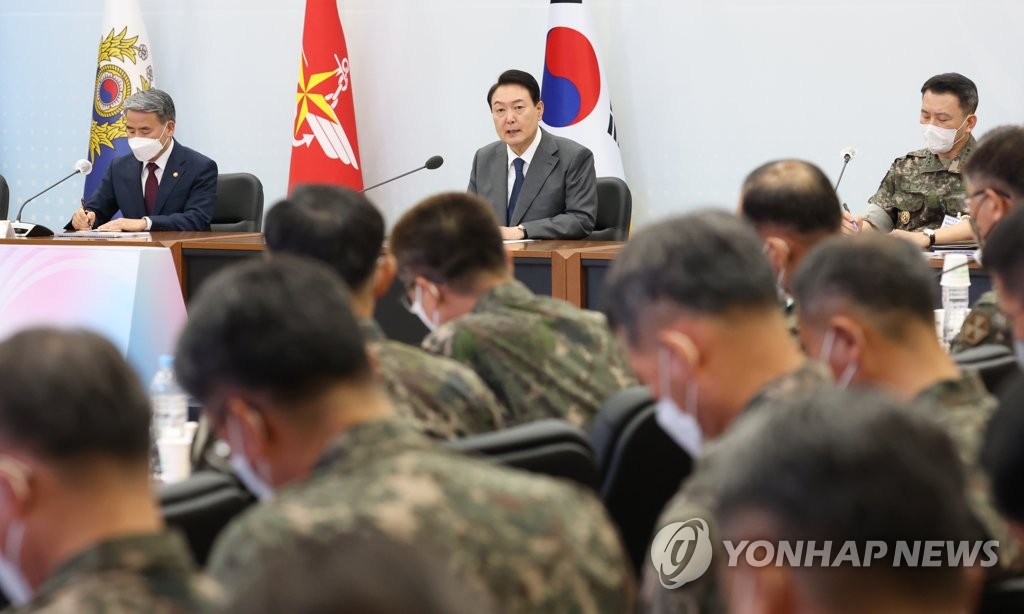 "They discussed the issue of creating the strategic command in phases to ensure it can effectively command and control the three-axis system and lead the efforts for the systematic force development," the ministry said in a press release.

The three-pronged system refers to the Korea Massive Punishment and Retaliation, an operational plan to incapacitate the North Korean leadership in a major conflict; the Kill Chain pre-emptive strike platform; and the Korea Air and Missile Defense system.

The ministry seeks to come up with a specific plan for the creation of the command next year and establish it in 2024, an informed source said, requesting anonymity.

It is also likely to command key assets for security operations in cyberspace and outer space, as the military is striving to enhance cross-domain operational capabilities by improving inter-service cooperation, observers said.

At the military gathering, participants agreed to reinforce the South Korean military's intelligence, surveillance and reconnaissance (ISR) capabilities and bolster capabilities that undergird the operation of the three-axis system.

"Through this, they agreed to strengthen our military's independent deterrence and capabilities to respond (to North Korean threats)," the ministry said.

In line with the modernization efforts, the military plans to conduct the trial operation of units employing cutting-edge technologies and expand such units in phases to all armed services.

The Army has already run the Army TIGER trial unit armed with high-tech equipment at its 25th Division since last month. TIGER is short for the transformative innovation of ground forces enhanced by the fourth industrial revolution technology.