SEOUL, July 6 (Yonhap) -- June Huh, the Korean American mathematician who won this year's prestigious Fields Medal, said Wednesday the ability to work together as a team in large projects has become important in the field of modern advanced mathematics, adding that such a process has an "addictive nature that is hard to quit."

On Tuesday, the 39-year-old Princeton University professor, who also serves as a distinguished professor of mathematics at the Korea Institute for Advanced Study (KIAS), became the first-ever scholar of Korean descent to win the award handed down by the International Mathematical Union (IMU) every four years.

The Fields Medal, first introduced in 1936, was founded to recognize and support younger mathematical scholars who have made major contributions in the field of mathematics. Awarded to mathematicians under 40, the Fields Medal is often referred to as the mathematical equivalent of the Nobel Prize.

"Joint research has become more and more active in modern mathematics. It's because thinking together with colleagues, as opposed to working alone, allows more efficiency and the ability to advance further and deeper," Huh said at a press conference held in Seoul via video link from Helsinki, where the award ceremony was held a day earlier.

Huh said working together not only provides better efficiency but also a great sense of joy for him.

"If we consider ourselves as individual bowls of water and keep exchanging waters back and forth, we might think that the amount of water could be reduced due to it being spilled in the process. However, the amount of water actually ends up growing, allowing us be prepared to understand complex (mathematical) structures," the professor said.

Huh said working together with research partners has given him a great sense of satisfaction, adding that collaboration has an "addictive nature that is hard to quit." 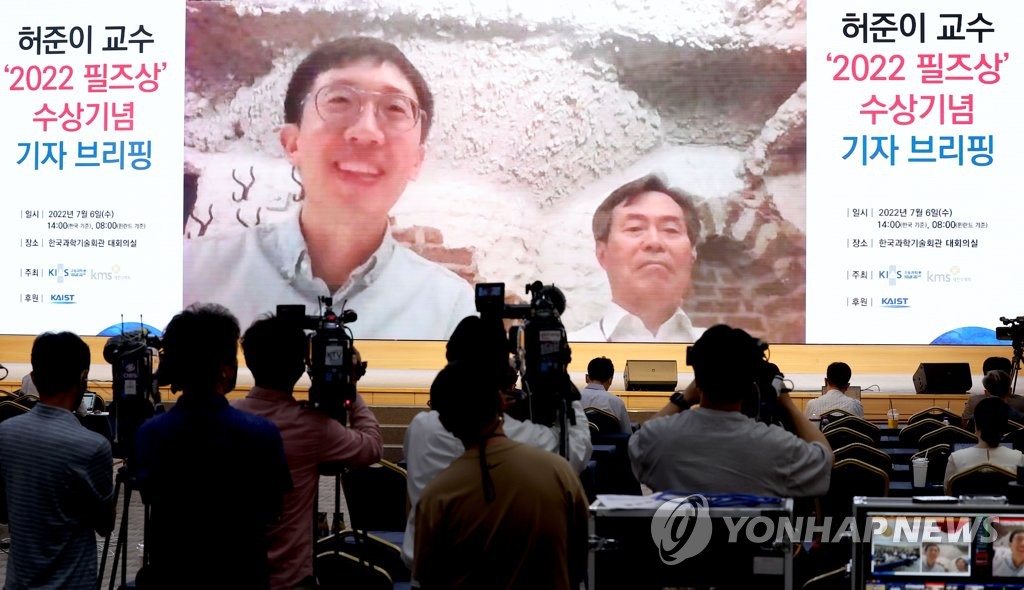 He also said he cherishes memories from all of his past projects, as each single one of them were conducted in collaboration with different scholars.

"Reflecting back (on past works) is like looking at a photo album with beautiful memories carrying the discussions and ideas that the partners and I have shared and reached upon," Huh said. "All of them are important memories, which we arrived through multiple serendipitous moments in the process."

When asked who might be his personal hero, Huh said he considered himself a very "fortunate person" for having encountered the right mentors and friends at the right moment throughout his career and life.

"I have a small notepad where I write down the names of mentors and friends who I consider my heroes, and their traits that I want to emulate. Those people are my role models," Huh said. "Like an actor, I sometimes try to mimic them or try to speak in the way they think. I have dozens (of role models), so it wouldn't be fair to single out one person."

In terms of his daily routine, Huh said he tries to focus hard on his research for four hours a day due to what he described as his "lack of endurance." "Rest of the time I spend with my family," he added. "I do some house chores and try to relax, preparing to focus on my work the next day."

Huh was born in 1983 in California but grew up in South Korea. He majored in physics and astronomy as an undergraduate at Seoul National University and studied mathematics at the university's graduate school. Huh obtained his mathematics Ph.D. from the University of Michigan in 2014.

Huh plans to arrive in South Korea on Friday to spend the summer in Seoul conducting research at KIAS.