Many K-pop stars, such as WJSN, aespa, ITZY, Super Junior, Seventeen, Enhypen, have released or will release new albums this month alone, with top girl group BLACKPINK set to put out a much-awaited new album next month.

"I heard the July chart race is very hot, so I kept asking (the agency) if it was the right time to make a comeback," member Umji said during a media showcase for "Summer Vibe" at a music hall in Seoul.

"It, of course, would be great if we get good results. But we think it would be really fun to work along with gorgeous idol singers who are active on the scene and expect to feel all the bustle on the scene of music programs after a long time." 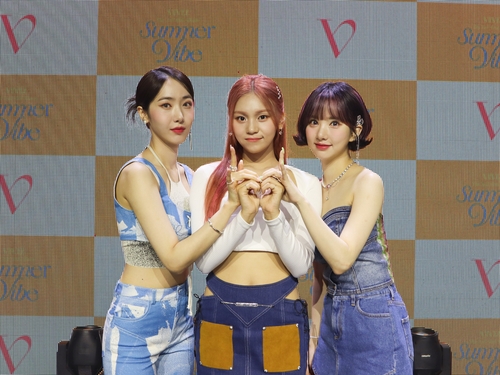 She expressed hope that fans would pay attention to how the band has improved from its previous album rather than comparing it with other groups because "Summer Vibe" is only the second album from VIVIZ. "I also hope it would serve a chance to make the color of VIVIZ more distinct than before."

The new EP has a total of six tracks, including the main single "Loveade."

"Loveade" is a funky retro pop-based dance song that compares the love of two people to a refreshing aid.

Asked why the band chose it as the main track, SinB said, "We thought we could cheer up many people in summer with our uplifting energy. We hoped they could rather enjoy the sweltering summer listening to this lighthearted and refreshing song."

Umji said the songs are not typical fast summer songs accompanied by strong beats but would feel more polished and new.

"I think they will make listeners feel good and refreshed rather than just elating them and that's our own style of refreshing music." 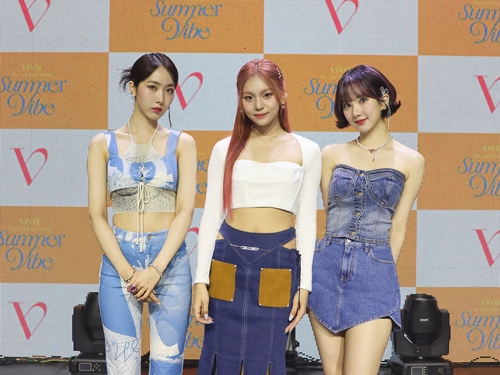 VIVIZ is undoubtedly a new group but all its members are veteran artists with seven years of experience under their belts as former members of the now-disbanded top-tier girl group GFriend.

After making a successful debut with its first EP "Beam of Prism" in February, the band topped two TV music chart programs with the album's main track, "Bop Bop!," just a week after the debut.

Since it appeared on the program right after the debut, the bandmates said it was an opportunity to grow as a three-piece group.

"We were able to grow a lot while presenting various performances on the program. I think our skills have also improved very much," Eunha said.

SinB said she learned how to make the band look better on stage in the process of preparing for the program.