Foreign Minister Park Jin held talks with Singapore's Vivian Balakrishnan, during which he called Singapore a core partner in Seoul's policy regarding the Association of Southeast Asian Nations (ASEAN), according to the ministry.

Park requested the Singaporean government's interest and support for South Korean companies' participation in future major infrastructure projects in the country and welcomed Singapore's efforts to introduce small modular reactors and hydrogen energy, calling for further consultations in the sectors, it added.

The two sides also agreed to strengthen strategic cooperation between South Korea and ASEAN nations to preserve a "rule-based order," and they discussed the Ukraine situation and agreed to closely work together on economic security issues stemming from Russia's invasion of Ukraine, according to the ministry.

Park arrived in Singapore the previous day as part of his first trip to Southeast Asia since assuming the post in May. He paid a courtesy call on Singaporean Prime Minister Lee Hsien Loong earlier in the day. 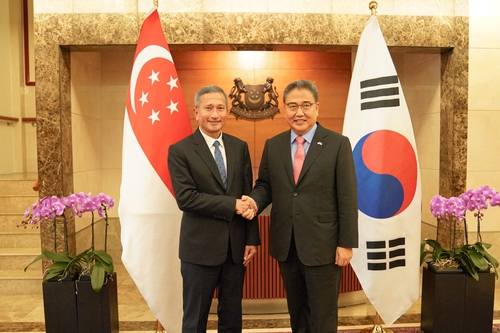