The fire broke out on a 49-ton boat docked at Hallim Port at 10:17 a.m. and spread to the two others, according to the Coast Guard and firefighters. The blaze was brought under control at around 3:30 p.m.

Three people were rescued with serious burns and sent to a hospital, while at least two others, including a foreign crewmember, remain missing.

Coast Guard rescuers, six patrol boats and a helicopter were mobilized to battle the fire and search the area for the missing people, officials said.

A probe is under way into the accident, but a captain of one of the three affected vessels said the explosion of a battery in the engine room appears to have caused the fire.

"When the fire broke out, crewmembers were checking the engine room after the engine of the vessel did not work. As there was a huge blast, battery explosion seems to be the most likely cause," he said.

The Jeju city government said it will carry out an emergency safety inspection into all vessels in the area and check related facilities in an effort to prevent any recurrence.

Thursday's accident came three days after three fishing boats caught fire at a nearby Jeju port. No casualties were reported at that time. 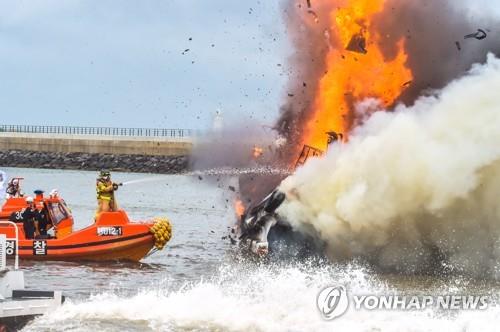 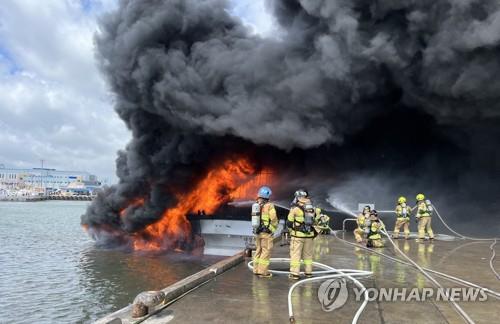