SEOUL, July 7 (Yonhap) -- President Yoon Suk-yeol sounded the alarm on the country's fiscal health on Thursday, saying people should wake up from the "fantasy" that increasing government spending will automatically improve people's livelihoods.

Yoon made the remark while presiding over a fiscal strategy meeting with members of the government and the private sector at Chungbuk National University in Cheongju, 112 kilometers southeast of Seoul.

"We must wake up from the fantasy of fiscal universalism," Yoon said, describing it as the belief that if the government spends more of its budget, "automatically, the economy will grow and people's livelihoods will improve." 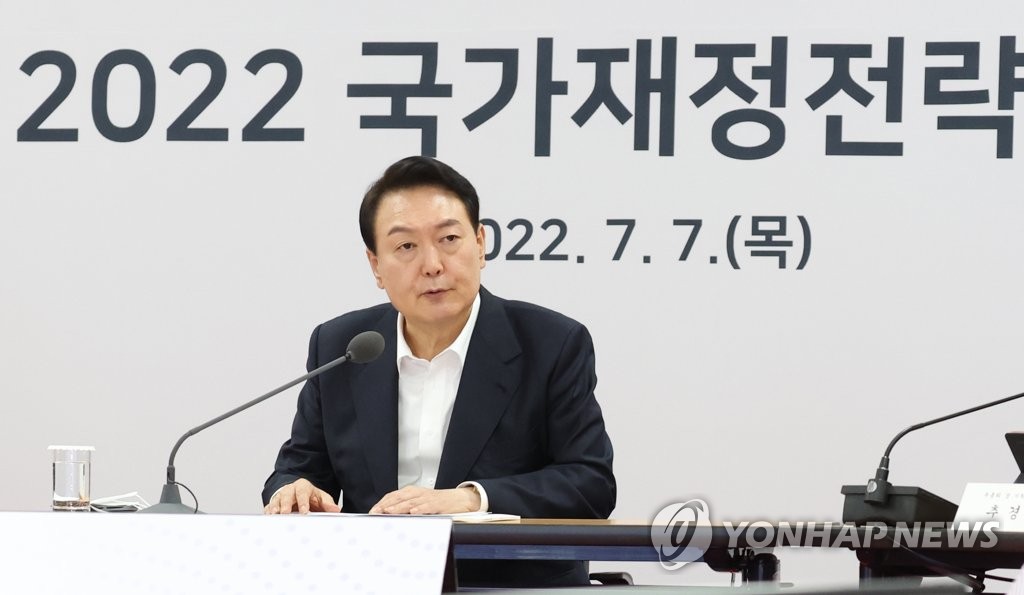 "In order to overcome the people's livelihood issues and fiscal crisis that we face, the government has to be the first to tighten its belt," he added.

The finance ministry unveiled plans to reduce the fiscal deficit to a size equivalent to less than 3 percent of the gross domestic product (GDP), from the 5.1 percent estimate for this year, and to cut the debt-to-GDP ratio to around "the midpoint" of the 50 percent range by 2027 to help slow the pace of the national debt.

The goals are a departure from the expansionary fiscal policy adopted by the previous Moon Jae-in administration to prop up economic growth and cope with the fallout of the COVID-19 pandemic.

"Over the past five years, fiscal conditions have greatly deteriorated," Yoon said, referring to the Moon administration's term. "Our solid finances are now in a state where they are considered a potential risk factor for our sovereign ratings."

The president called for selling off the assets of public organizations, starting with those that have little relevance to the organizations' functions, and carrying out "a high-degree restructuring of expenditures without sanctuary" to ensure taxes are not wasted.

With the money saved, Yoon said he will provide greater support to vulnerable social groups so that they can overcome the economic crisis and invest in fostering advanced technologies that will serve as the engine of future growth.

He also vowed to use such resources to raise troops' salaries and invest in universities outside the capital, citing the university where the meeting was held.

Yoon calls for waking up from 'fiscal universalism'

Yoon calls for waking up from 'fiscal universalism'