SEOUL, July 8 (Yonhap) -- South Koreans are known for their coffee craze that has made the country the third-largest coffee market in the world after the United States and China. Trendy espresso bars dot Seoul and other major cities, and some shops offer drip coffee brewed by robot baristas.

The explosive growth, coupled with a COVID-19-driven surge in delivery food consumption, however, came with an unwelcome plastic trash crisis, prompting the government to roll out one of the world's most ambitious disposable cup recycling mandates.

The compulsory deposit-refund scheme, originally set to take effect on June 10, mandates a surcharge of 300 won (23 US cents) per drink a consumer buys in a takeaway cup, refundable upon the return of the package for recycling.

In a reversal only three weeks ahead of the scheme's implementation, however, the environment ministry postponed the implementation until December at the request of the ruling People Power Party and cafe operators.

Now, the fate of the waste prevention program is up in the air as the ministry is sandwiched between indignant environmentalists decrying the postponement and coffee shop operators calling for a revision of the scheme, which they say will eat into business profitability and increase their workload.

According to a demonstration of the mobile application developed to handle the takeaway cup deposit scheme, a customer can have the 300-won deposit refunded to his or her bank account preregistered on the app by scanning a barcode sticker pasted on the cup and a personal application code on a tablet computer installed at a coffee shop.

Some 38,000 outlets nationwide run by 105 cafe, bakery and eatery chains, including Starbucks and McDonald's, were to be subject to the mandate. A takeaway cup from one of those stores is refundable at another. 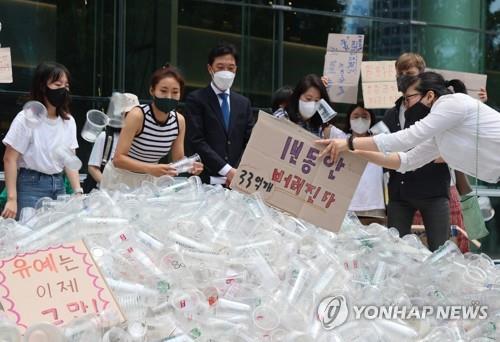 Cafe and eatery operators decry the deposit-refund system as shifting the burden of waste prevention to them.

They argue the costs of government-issued barcode stickers, priced slightly higher than 300 won each, and storing and transporting returned cups for recycling all fall to them under the scheme, making each cup of beverage sold several cents less profitable.

Another heavy one-off expense is required when installing tablet computers dedicated to the refund service on top of the additional workload of having to keep returned cups clean inside the shops before recycling as well as handling in-person customers not savvy with mobile applications, they say.

Some businessmen were even willing to risk the fine of up to 3 million won, imposed when a deposit refund is refused, rather than dealing with the hassle.

"I may end up only dealing with the trash if a customer buys a beverage from a big chain cafe and returns the cup at my shop," a coffee shop owner in the southern port city of Busan said before the postponement of the deposit-return scheme.

Another cafe owner voiced worries over a potential sales decline, saying, "From the standpoint of customers, the scheme means a price hike of 300 won ... and this could erode overall sales." 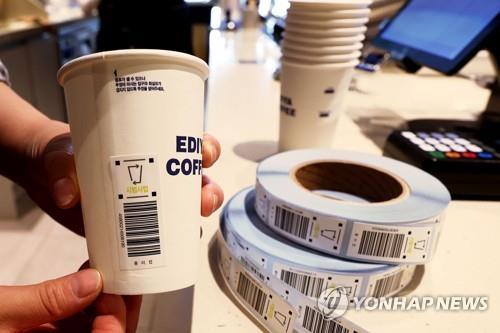 Environmentalists and environmentally conscious customers are indignant that the deposit scheme is being delayed at a time when its coverage needs to be urgently expanded to regulate more disposable cups.

According to a report by Greenpeace, about 3.3 billion single-use plastic cups were used in South Korea in 2017, or 65 per person. Only about 5 percent of used disposable plastic cups are recycled, according to reports.

The group argued delaying the implementation of the scheme mandated under the revision of the so-called resource recycling law in June 2020 is illegal.

"The postponement of the single-use cup deposit scheme is a legal violation," the group said last week, calling for a thorough inspection.

Last month, Environment Minister Han Wha-jin assured that her ministry will make sure the scheme will be implemented from Dec. 2, but many predict a major revision will be inevitable.

Ministry officials and coffee shop operators familiar with the issue said the ministry is reviewing an alternative pilot deposit scheme with limited coverage in terms of shops and regions to be subject to the mandate. 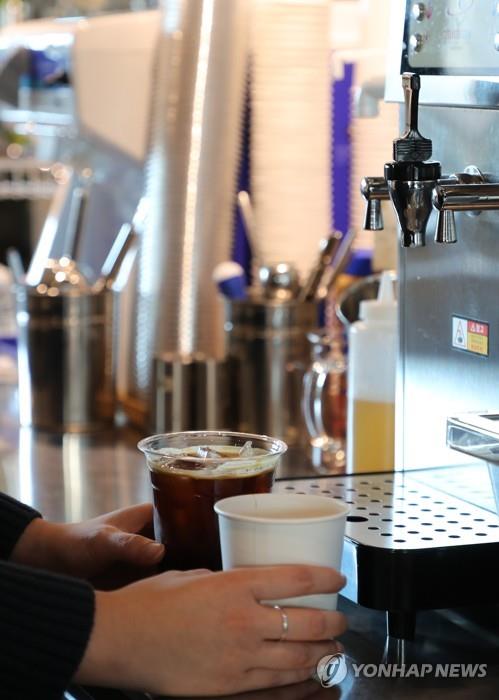 Currently, several plastic-free cafe experimental projects are successfully under way in Seoul and the southern island of Jeju.

Since November, 20 coffee shops around Seoul City Hall have been running a tumbler rental program offering takeaway beverage only in a reusable cup, refundable upon return at any of the 20 shops.

In Jeju, all 23 Starbucks stores have been serving beverages only in mugs, personal travel mugs or reusable takeaway cups since late last year. The coffee brand plans to drive out all disposable cups in its stores in Seoul by 2022 and all Starbucks stores across the country by 2025.