SEOUL, July 11 (Yonhap) -- Banks in South Korea will likely maintain a mitigated lending stance for households in the third quarter but credit risks for them were expected to rise amid increasing borrowing costs, a survey showed Monday.

According to the poll of officials handling credit affairs at financial institutions, including 18 banks, conducted by the Bank of Korea (BOK), the index gauging bank's attitude toward home-backed loans and unsecured household lending stood at 14 and 19, respectively, for the July-September period.

The figure compared with 31 and 19 tallied a quarter earlier.

A reading above zero means the number of lenders that will ease lending surpasses that of banks planning to tighten lending criteria.

Banks "are expected to maintain a mitigated lending stance in response to a slowing pace of growth of household lending," the BOK said.

Household debt had been on the rise in recent years as people have taken out loans to tide over the pandemic and bought homes amid soaring prices. The debt, however, saw its growth slow recently amid tightened lending rules and rising borrowing costs.

The BOK has hiked its policy rate at a fast clip in recent months to rein in inflation, putting upward pressure on banks' lending rates.

The central bank has raised the rate five times -- each by 0.25 percentage point -- since August last year to 1.75 percent.

The fast-rising borrowing costs have increased worries over credit risks for households.

The index gauging credit risks for households rose from 39 for the third quarter from the previous quarter's 22, the data showed.

"Credit risks for households were expected to rise sharply due to such factors as mounting debt and interest payment burden from growing lending rates," the BOK said. 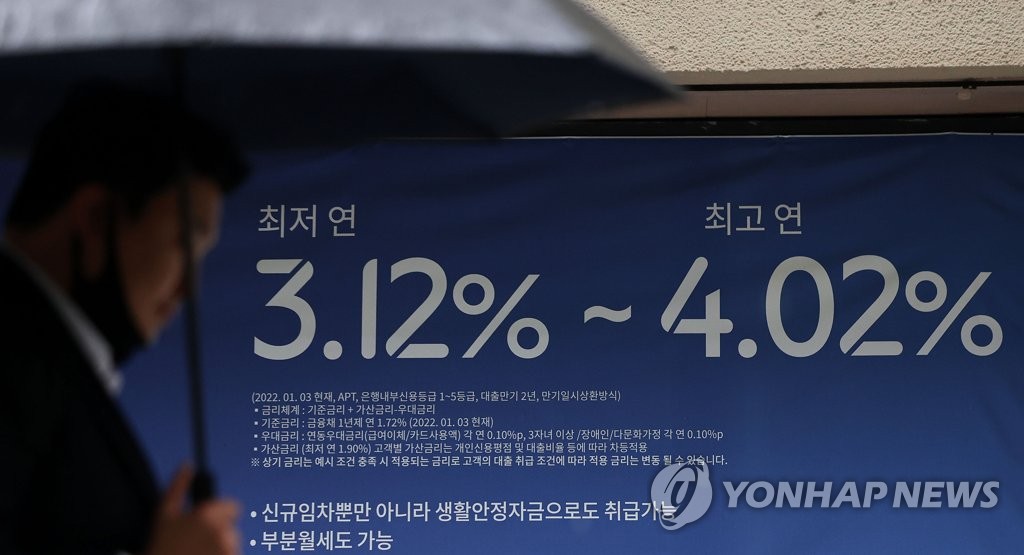