SEOUL, July 12 (Yonhap) -- South Korea's new coronavirus cases surged to a two-month high of over 37,000 on Tuesday, driven by the spread of a highly contagious new omicron subvariant and deepening concerns over another virus wave.

The country added 37,360 new COVID-19 infections, including 260 from overseas, bringing the total caseload to 18,561,861, the Korea Disease Control and Prevention Agency (KDCA) said.

Tuesday's figure is the highest since May 11, when the daily count came to 43,908 in the aftermath of the omicron wave. It also more than doubled from 19,371 cases logged a week earlier, as the country has seen an upturn in infections from end-June.

The KDCA reported seven deaths from the virus, putting the death toll at 4,668. The fatality rate stood at 0.13 percent.

Daily infections are expected to increase.

As of 9 p.m. on Tuesday, South Korea reported 38,734 daily infections, up 2,929 from the same period a day earlier, according to local governments and health authorities. Daily cases are counted until midnight and announced the following morning. 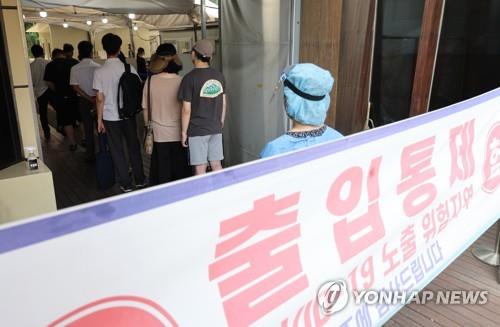 The new infections dropped markedly from the peak of more than 620,000 in mid-March but have risen again to hit over 20,000 last week for the first time since mid-May.

The KDCA confirmed the country has entered a new wave of COVID-19 and raised the nationwide risk level of the virus by one notch from "Low" to "Moderate" for the first time in eight weeks, citing the possibility of a continuous upturn in infections.

The average daily caseload during the July 3-9 period came to 15,987, up 87 percent from a week earlier, the KDCA said. Experts have warned the daily count could surge to around 200,000 next month.

The reproduction rate, which represents new infections estimated to stem from a single case, has been on a constant rise since early June to come to 1.40 last week, the KDCA said.

The upward trend is driven by the fast spread of the highly contagious mutation of the omicron strains, BA.5, which is known to be more contagious and better able to escape immunity compared with earlier versions.

The other factor behind the resurgence is declining immunity, as the protection by a vaccine or an infection decreases over time.

The growth in outdoor activities after eased social distancing rules and the increased usage of indoor air conditioning systems over an early heat wave also caused the country to see an upward trend, experts said.

In line with the resurgence, the government is reviewing a new set of antivirus measures, which are expected to be announced Wednesday, according to officials.

In April, the government removed almost all social distancing rules to support the people's return to normalcy, including private gathering limits and business hour curfews.

But chances seem low for the government to reimpose strict curbs, as the country has maintained a stable medical response system and the growth in infections has not led to a drastic surge in deaths and serious cases, experts said.

One of the new likely antivirus measures would include giving a second booster shot, or fourth dose of COVID-19 vaccines, to a larger number of people, as it has only been administered to those in their 60s and older and other high risk groups. 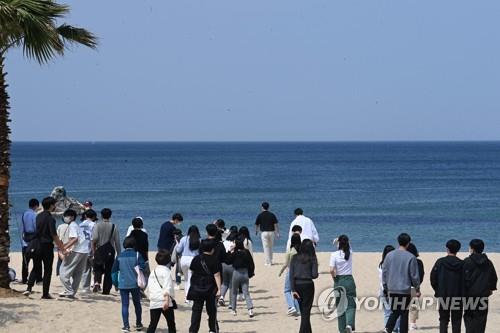