SEOUL, July 12 (Yonhap) -- All members of TWICE have renewed their contracts with JYP Entertainment, breaking the so-called "seven-year curse," a crisis experienced by many K-pop idol groups around the seventh year of their debut.

"We renewed contracts with all members ahead of the expiration of TWICE's contracts this autumn," the agency said in a release Tuesday.

"TWICE, which played a decisive role in establishing the status of K-pop entertainment company JYP, and JYP, which has been a strong support for TWICE's growth as a top K-pop girl group, agreed to renew the contracts with confidence in their future based on such trust," it added. 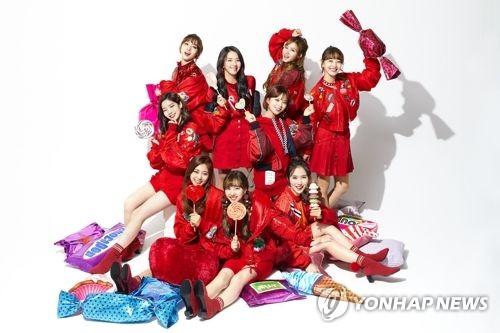 The "seven-year curse" is a term used by K-pop fans to refer to many idol groups' tendency to disband or start to leave their companies and groups after seven years in the industry, which is the standard length of exclusive contracts between K-pop idols and their agencies. This "curse" has hit numerous groups, such as 2NE1, Miss A, GFriend, Lovelyz and April.

Many TWICE fans have anxiously waited for the news of the band's contract renewal due to the infamous tendency in the industry.

One of the most popular girl groups in Asia, TWICE has been a prolific group since its debut in October 2015. It also gained popularity in the United States since its third full-length album "Formula of Love: O+T=<3" debuted at No. 3 on the Billboard 200 main albums chart following its release in November.

Most recently, it concluded a sold-out North American tour, only to return for two encore concerts in Los Angles.