SEOUL, July 12 (Yonhap) -- A push by Kakao Corp. to sell part of its shares of Kakao Mobility Corp. to a private equity fund has drawn strong protest from its labor union, which criticized the South Korean tech giant for neglecting its corporate social responsibility.

Kakao, which currently owns a 57.5 percent stake in Kakao Mobility, is considering selling around 10 percent of its shares to MBK Partners to relinquish its control over the mobility company.

Bae Jae-hyun, Kakao's chief investment officer, said in a regulatory filing last Thursday that the company was considering becoming the second-largest shareholder of the ride-hailing company "in order to increase shareholder value and to ensure continuous growth of Kakao Mobility."

Kakao Mobility was spun off from Kakao in August 2017 and operates as a separate entity. The company with a valuation estimated at around 8.5 trillion won (US$6.5 billion) operates the Kakao T app, which offers designated driving, parking and navigation services.

MBK Partners is in talks with other investors, including a TPG-led consortium and the Carlyle Group, to buy their stakes in Kakao Mobility to become the mobility company's largest shareholder, according to Crew Union, a group of unionized workers of Kakao and its affiliates.

Currently, the TPG-led consortium and the Carlyle Group own 24 percent and 6.2 percent stakes in Kakao Mobility, respectively. 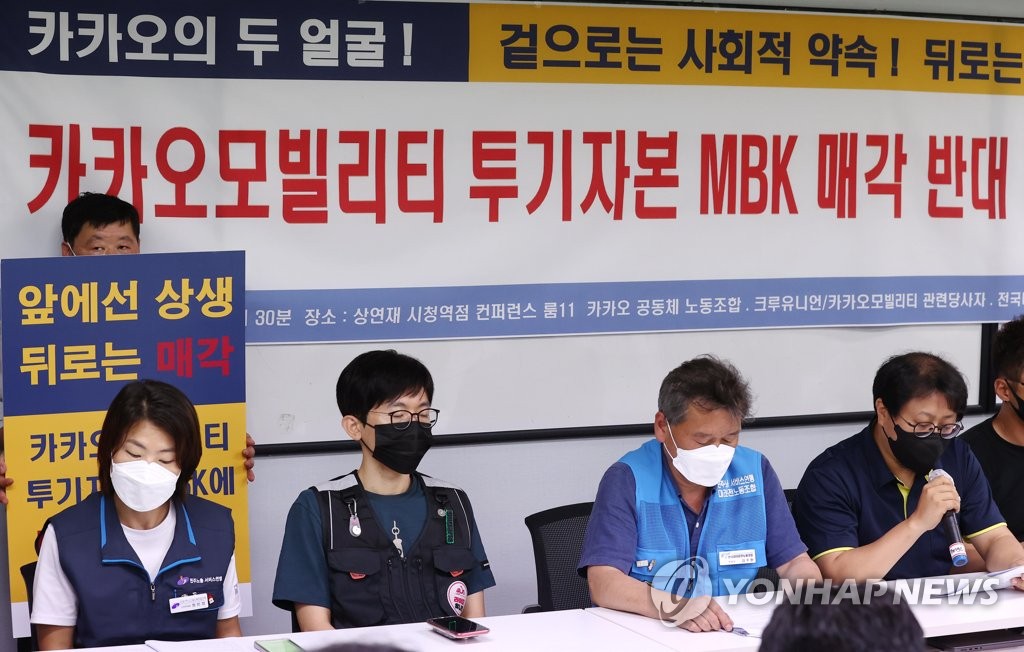 Crew Union held a press conference this week opposing Kakao's share sale push, accusing the tech giant of failing to own up to its social responsibility pledges.

"The social responsibility promises that Kakao made last year in reaction to criticism of being over focused on business expansion and profits have not been properly followed up on," Crew Union said in the press conference held Monday.

In September of last year, Kakao announced a set of social responsibility measures to help support small businesses, including the establishment of a 300 billion-won fund for SMEs, amid allegations that its rapid business expansion was wiping away smaller competitors.

Crew Union said the rapid growth of Kakao in becoming the No. 1 platform company in South Korea was possible due to the "blood and sweat of countless workers," and questioned why Kakao was trying to essentially sell the company "at the expense of abandoning its image of social responsibility."

The union also claimed the share sale deal could lead to a weakening of labor conditions and price hikes for customers.

Amid the opposition, the tech giant has announced its Corporate Alignment Center, a division charged with overseeing operations of Kakao's subsidiaries, plans to hold a meeting with employees of Kakao Mobility this week to communicate its envisioned plan.