SEOUL, July 12 (Yonhap) -- Even 17 years after their debut, members of K-pop group Super Junior remained jolly and talkative, with their humorous remarks constantly drawing much laughter from the emcee, during an online press event in Seoul to promote a new album.

"SM has a long history and has managed many artists, but Super Junior is the first one (among them) to drop its 11th full-length album," team leader Lee Teuk said during the event streamed on YouTube to reporters. "K-pop is loved by fans all around the world, isn't it? Since Super Junior deserves a page in K-pop history, my bandmates and I worked hard on the new album." 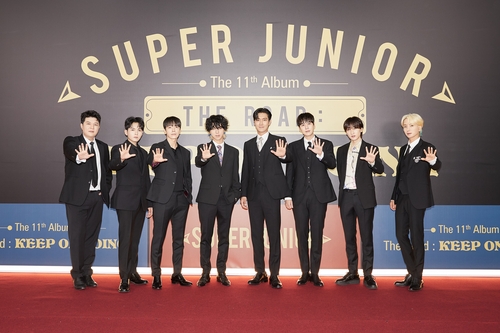 Super Junior debuted in 2005 as a 13-member boy group under the K-pop powerhouse SM Entertainment and has since led the global boom of Korean pop music with numerous hit songs, such as "Sorry, Sorry" and "Bonamana."

The band, now with only nine members active, came back as a group between brisk individual activities for the release of "The Road : Keep on Going," the first volume of its 11th studio album series titled "The Road."

Super Junior is now one of the longest-running idol groups in the music industry.

"Frankly speaking, our members are cowardly," the leader said when questioned about the secret behind the group's longevity. "The band could be disbanded if a member pretended to be insane and left, saying, 'I'll not do this,' but we don't have any member doing this because he will be almost killed by other bandmates in that case."

Laughing loudly, Eunhyuk added, "That's because we all know very well how much we will be cursed by remaining members by leaving them." 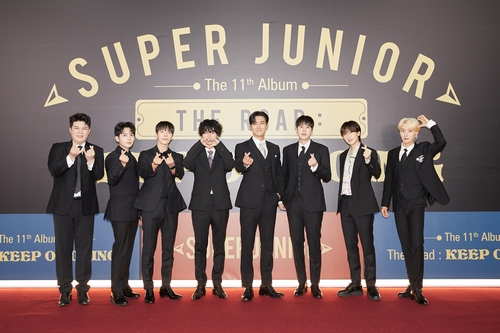 The album set to hit music services at 6 p.m. has a total of five tracks, including the main single "Mango," "Don't Wait" and "My Wish."

"This album carries a message that Super Junior will keep walking down its path," Donghae said. "I think we made an album through which we want to talk about our present."

Super Junior is to resume its "Super Show" series world tour with concerts in Seoul from July 15-17 after the COVID-19-enforced suspension for more than two years.

"It's like a dream to hold in-person concerts for the first time in nearly three years," Donghae said. "The atmosphere for our practice for the shows is better than any time before. We look forward to seeing our fans during the concerts."

Although many celebrities tend to wane and be forgotten as time goes by, Super Junior wants to be a group that has stronger bonds with its fans and becomes more solid, Lee Teuk said. "We'll keep going," he stressed.

After more than 17 years as K-pop icon, Super Junior vows to keep going

After more than 17 years as K-pop icon, Super Junior vows to keep going