In November 2019, the former Moon Jae-in administration sent back two North Korean fishermen captured near the eastern inter-Korean sea border. The two confessed to killing 16 fellow crew members and expressed a desire to defect, but authorities dismissed their intentions as insincere.

The investigation into a North Korean defector usually takes between 15 days and one month, but the probe at the time only took around three to four days, stoking suspicion that the Seoul government tried to repatriate the defectors in an effort to curry favor with Pyongyang.

On Tuesday, the Database Center for North Korean Human Rights (NKDB) asked the prosecution to investigate 11 former officials under the Moon government, including Chung Eui-yong, the then national security adviser.

Charges include abuse of power, dereliction of duty, destruction of evidence, and aiding and abetting criminals, the NKDB said.

The NKDB said the two fishermen at the time were South Korean nationals, in accordance with the Constitution, and sending them back to the North was a human rights violation and infringement of sovereignty.

Earlier, Seoul's spy agency, the National Intelligence Service, also filed a complaint with the prosecution against its former chief, Suh Hoon, on allegations that he had ordered an early end to an internal investigation into the case. 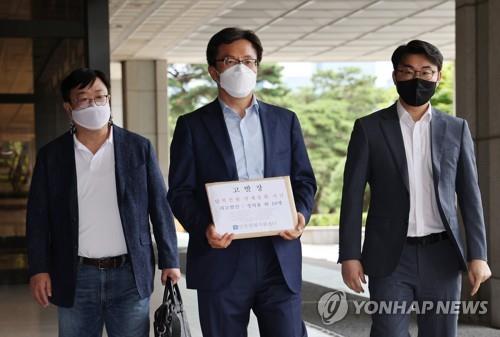 Complaint filed against Moon gov't officials in repatriation of N.K. fishermen in 2019

Complaint filed against Moon gov't officials in repatriation of N.K. fishermen in 2019