The Bank of Korea (BOK) said that it will maintain its rate-increasing stance as it worries that high inflation will likely persist for the time being.

The monetary policy board of the BOK held a rate-setting meeting earlier in the day and voted to increase the benchmark seven-day repo rate from 1.75 percent to 2.25 percent, according to the central bank.

This marked the BOK's first "big-step" rate hike ever and the sixth rise in borrowing costs since August last year, when the central bank began rolling back its easy monetary policy put in place for about two years to bolster the pandemic-affected economy.

Wednesday's rate increase also came after the central bank's back-to-back 0.25 percentage-point rate increase both in April and May, and represented the first time borrowing costs have been elevated for the third consecutive time.

South Korea has been grappling with fast-rising inflation pressure amid soaring energy and commodity prices caused by rebounding demand from the pandemic and protracted supply chain disruptions that have been exasperated by the ongoing war in Ukraine.

The country's consumer prices, a key gauge of inflation, soared 6 percent last month from a year earlier. It was the sharpest price increase since a 6.8 percent jump in November 1998, when South Korea was in the midst of the 1997-98 Asian financial crisis.

The government expects inflation will be under upward pressure and staying in the 6 percent range for the time being.

In May, the BOK revised up its 2022 inflation growth projection to 4.5 percent from 3.1 percent three months earlier and recently said the pace could be faster than earlier anticipated.

No less concerning is whether the BOK could anchor public psychology over the path of inflation down the road amid worries people would beef up demand for wage hikes in anticipation of rising prices, which would result in more upward inflation pressure.

An earlier BOK report showed ordinary people expected consumer prices to rise 3.9 percent over the next year in June, the fastest pace since April 2012.

The latest rate increase came as the U.S. Federal Reserve has been aggressively raising its interest rate to combat runaway inflation. The Fed increased its federal funds rate last month by 0.75 percentage point -- the sharpest one-time rate hike in nearly 30 years -- to a target range of 1.5-1.75 percent.

The Fed has signaled it could raise the rate by a similar magnitude later this month.

The Fed's swift and sharp monetary tightening has generated speculation that interest rates in the U.S. could soon become higher than those in South Korea, a situation that market watchers worry could precipitate capital flows from here in pursuit of higher returns.

Such capital outflows are feared to add more fuel to inflation by further weakening the local currency and sending import prices even higher. The won fell to the lowest closing so far this year Tuesday, which also marked the weakest level since July 13, 2009. 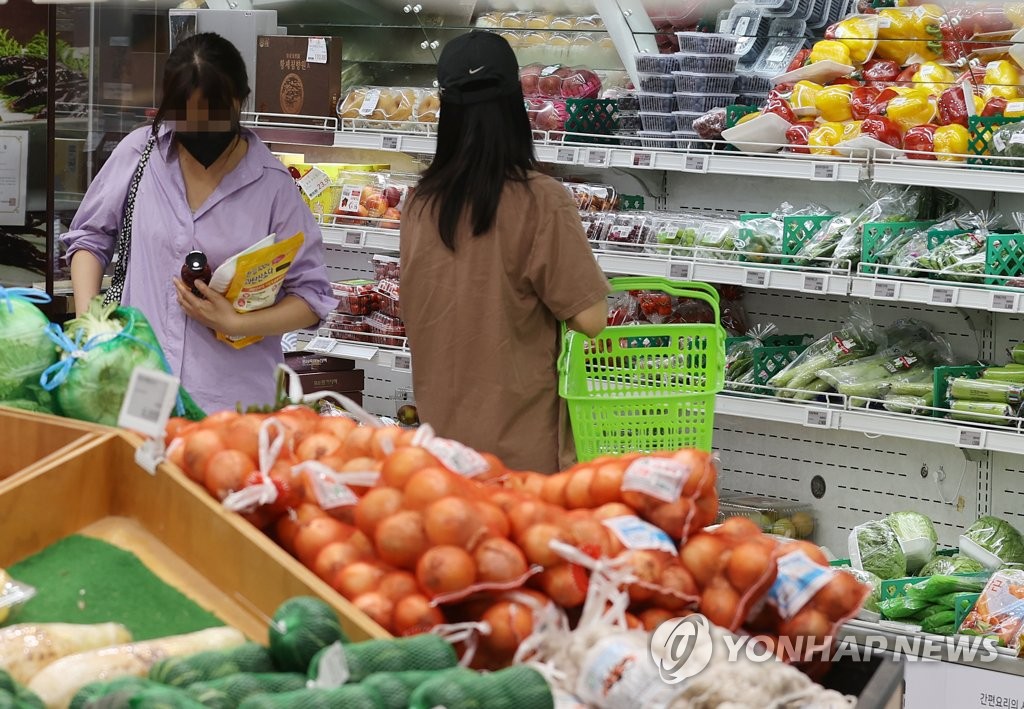 The fast-rising cost of borrowing has generated worries it could weigh on the economy by deepening financial burdens on many indebted people and dampen consumption, which has been showing signs of rebounding from the pandemic.

South Korea's economy has been faced with growing risks of losing steam as deteriorating external economic conditions are feared to dent investment and export growth amid high inflation, the finance ministry earlier said.

Exports remain a major driver for economic growth, but surging import bills caused the country to post a trade deficit for the second straight month in May, government data showed.

The country posted a current account surplus of US$3.86 billion in May, but it was much smaller than the previous year's surplus of $10.41 billion.

The possibility has been raised of the country facing stagflation -- a mix of high inflation and economic slump -- when hawkish monetary policy fails to stabilize prices only to excessively cool the economy.

Last month, the finance ministry lowered its 2022 economic growth outlook to 2.6 percent. The BOK also revised down its growth projection for this year to 2.7 percent in May from a 3 percent rise projected three months earlier.