SEOUL, July 13 (Yonhap) -- South Korea's new coronavirus cases rose to over 40,000 for the first time in two months as the country has experienced a resurgence of infections amid the fast spread of a highly contagious new omicron subvariant.

The country added 40,266 new COVID-19 infections, including 398 from overseas, bringing the total caseload to 18,602,109, the Korea Disease Control and Prevention Agency (KDCA) said.

It is the first time that the daily count surpassed the 40,000 level since May 11, when the figure came to 43,908 amid the spread of omicron.

Wednesday's figure also more than doubled from 19,362 cases logged a week earlier, as the country has seen an upturn in infections from end-June due to the highly contagious omicron subvariant BA.5.

The KDCA reported 12 deaths from the virus Wednesday, putting the death toll at 24,680. The fatality rate stood at 0.13 percent. 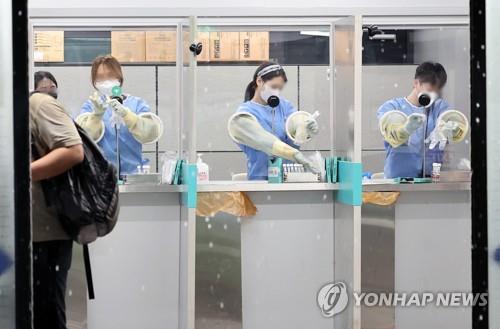 The KDCA has confirmed that the country began experiencing a new virus wave, ending a downward trend from the peak of more than 620,000 in mid-March.

Behind the resurgence is the BA.5 subvariant, which is known to be more contagious and better able to escape immunity compared with earlier versions.

The proportion of BA.5 cases among total infections in South Korea came to 35 percent during the July 3-9 period, compared with 28.2 percent a week earlier, and it is expected to become a dominant variant in the country soon, according to the KDCA.

The number of infections among international arrivals has also risen at a fast pace recently, as the country lifted the mandatory self-quarantine period for all arrivals and more people have visited here in line with the growth in international flights.

Wednesday's figure, or 398 cases, is the second-largest number among foreign entrants so far since Jan. 14, when the number stood at 406.

In a move to better protect the people, the government announced Wednesday that it will administer the fourth COVID-19 vaccine shot to a larger number of people.

Those in their 50s and older, as well as people aged 18 and older who have underlying health conditions, will be eligible for the second booster shot starting next week, Prime Minister Han Duck-soo said.

Currently, the fourth dose is reserved for those in their 60s and older and those with an immune disorder, and 4.54 million people, or 8.9 percent of the total population, had received the fourth shot as of Tuesday, according to the KDCA.

The government also decided to maintain a seven-day mandatory quarantine for people who are infected with the virus.

By the end of this month, the government will expand the number of "one-stop" COVID-19 treatment centers, where people can take virus tests, get in-person medical care services and receive antiviral drugs, to 10,000 from the current 6,338.

A set of antivirus measures announced Wednesday did not involve strict social distancing rules, though Han said the government will review such curbs in case the virus situation sees "a grave change."

In April, the government removed almost all social distancing rules to support the people's return to normalcy, including private gathering limits and business hour curfews.

"We've seen a new wave, but the number of serious cases and deaths has stayed at a stable level. Under the circumstances, we will focus on beefing up quarantine and medical systems by expanding vaccination programs, treatment and hospital beds, while minimizing the restriction of people's social activities," the KDCA said.

The Yoon Suk-yeol government has stressed the need to devise "science-based" quarantine measures backed by scientific data and analysis to better respond to the prolonged virus situation.

The health authorities forecast that the daily count could top 200,000 in around mid-September and mid-October.

The number of serious cases could rise to up to 1,450 by the time, and daily COVID-19 deaths could hover over 100, according to the forecast.

The KDCA earlier said that the country would experience a resurgence with around 170,000 daily cases in around November.

"We're seeing a new wave earlier than expected, as people's immunity declines over time and the BA.5 strain that escapes immunity has spread fast," the KDCA said. 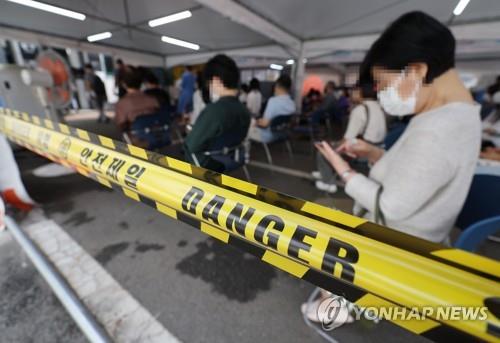