The Rnsearch poll of 1,045 voters conducted from Saturday to Tuesday showed 32.5 percent of respondents approved of the way Yoon handled state affairs while 63.5 percent gave a negative assessment.

Yoon's approval rating, which came in at 52.5 percent four weeks earlier, has been trending lower in the past month. After falling to 42.6 percent in the same poll a week ago, it plunged 10.1 percentage points to 32.5 percent this week.

In the same period, those who were unhappy with Yoon's performance jumped from 43 percent to 63.5 percent. 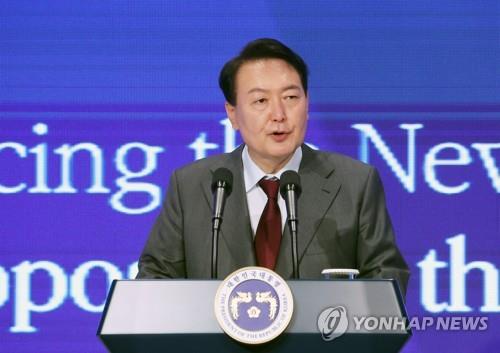 The latest poll comes amid growing concerns over the economy and political turmoil at the ruling People Power Party (PPP).

In politics, Yoon's PPP has been embroiled in a power struggle after its Chairman Lee Jun-seok was suspended for six months over a sexual bribery scandal.

"Multiple factors seem to have affected the result, such as an absence of a control tower to tackle livelihood issues and internal strife at the ruling party," an Rnsearch official said.

The poll of 1,017 respondents, conducted from Saturday to Monday, showed 37.8 percent were satisfied with Yoon's handling of state affairs while 59.2 percent gave a negative evaluation.