According to the Korean Film Council's monthly report on the local film industry, Korean flicks accounted for 57.5 percent of the total box office sales of last month with 95.2 billion won (US$73 million).

Local films also represented 60.4 percent of the movie tickets sold in the month, up about 7 percentage points from 53.1 percent in May. 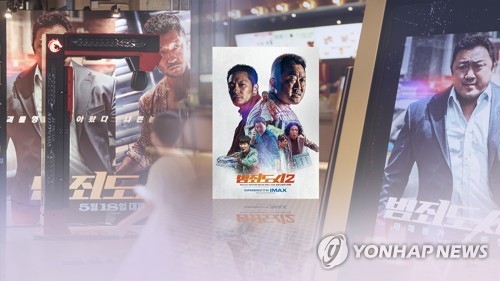 Released in May, the sequel to the 2017 hit "The Outlaws" became the first film to top 10 million admissions since the COVID-19 pandemic began. The sequel had drawn about 12.6 million moviegoers as of Wednesday.

Among indie and art house films, "The Red Herring," a Korean documentary about the embattled ex-Justice Minister Cho Kuk, topped the chart by collecting more than 1.24 billion won in ticket sales from 137,000 moviegoers.

It was followed by "After Yang," an American sci-fi drama written and directed by Kogonada, and "Cassiopeia," a Korean drama starring Ahn Sung-ki and Seo Hyeon-jin.