Trading volume was relatively small at about 303 million shares worth some 5.9 trillion won (US$4.5 billion), with gainers outnumbering losers 550 to 298. 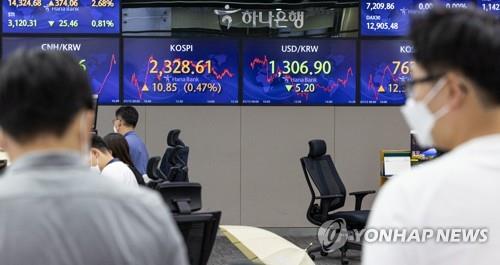 The key stock index rebounded after a two-day loss since Monday, despite an overnight U.S. stock fall.

The BOK governor said one or two more rate increases may be possible before the end of this year if the path of inflation remains within its expectations.

Investors' eyes are now on the U.S. consumer price index (CPI) for June, a key gauge for the Federal Reserve's rate decision at the end of this month.

"Eased short-term uncertainties seem to have pushed up the stock prices a bit, although we still see uncertainties about events like the U.S. CPI data," he added.

The local currency closed at 1,306.9 won against the U.S. dollar, up 5.2 won from the previous session's close.

Bond prices, which move inversely to yields, closed higher. The yield on three-year Treasurys lost 8 basis points to 3.211 percent, and the return on the benchmark five-year government bond fell 6.7 basis points to 3.278 percent.