SEOUL, July 13 (Yonhap) -- Prosecutors raided the state intelligence agency on Wednesday as part of an investigation into its two former directors in two separate incidents linked to North Korea during the previous administration.

The Seoul Central District Prosecutors Office sent a team of prosecutors and investigators to the head office of the National Intelligence Service (NIS) in southern Seoul to seize documents and other evidence, officials said.

The investigation came after the NIS filed a complaint with the prosecution against Park Jie-won, a former head of the NIS, and his predecessor, Suh Hoon, for destroying intelligence documents and ordering an investigation to end early, respectively. Both of them served under the liberal Moon Jae-in administration.

The agency has brought multiple charges against its own former chiefs, such as abuse of power, damaging public records and falsifying official records.

The 47-year-old official, Lee Dae-jun, was fatally shot by the North's coast guard near the Yellow Sea border between the two Koreas, a day after going missing while on duty on board a fishery inspection boat.

The Moon government concluded at the time that the official was killed while attempting to defect to the North, but that conclusion was overturned last month as the Coast Guard announced it has found no concrete evidence backing the defection allegations.

Park served as the NIS chief from July 2020 to May 2022 until President Yoon Suk-yeol took office.

Park has dismissed the allegations, saying that he knew nothing of the deleted documents.

Separately, the NIS also requested the prosecution look into suspicions that Suh ordered an early end to an internal investigation into the case of two North Korean fishermen who were sent back to the North in 2019.

However, the Moon administration sent them back to the North, where they could face harsh punishment, saying their intentions are insincere. The move stoked suspicion the Seoul government tried to repatriate the defectors in an effort to curry favor with Pyongyang.

Suh worked as head of the NIS from 2017 to 2020 and then served as Moon's national security adviser for two years.

Suh, who has not made any announcement, is currently staying in the United States. 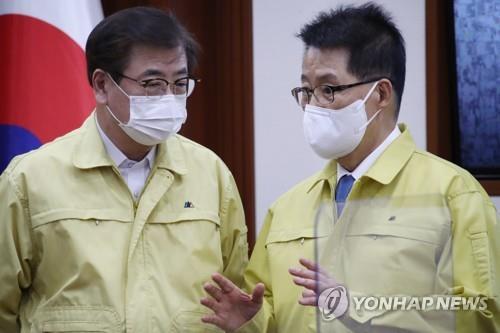