(ATTN: UPDATES with more remarks by LaCamera in paras 13-16)
By Song Sang-ho

SEOUL, July 13 (Yonhap) -- U.S. Forces Korea (USFK) Commander Gen. Paul LaCamera said Wednesday it's "not a matter of if, but when" North Korea will conduct another nuclear test while stressing his "top priority" on combat readiness.

In a brief interview with Yonhap News Agency on the margins of a forum, LaCamera said the North could determine the timing of what would be its seventh nuclear test in consideration of various conditions, including a major political event in Beijing slated for this fall.

His remarks came amid speculation that Pyongyang has made all key preparations for a nuclear test at the Punggye-ri site and is waiting for the right timing.

"It is not a matter of if, but when," he said before his speech at the Asian Leadership Conference hosted by the local daily Chosun Ilbo. "It could be now, it could be a couple of weeks, it could be this year ... It could be how he feels he needs to use it for his leverage I think." 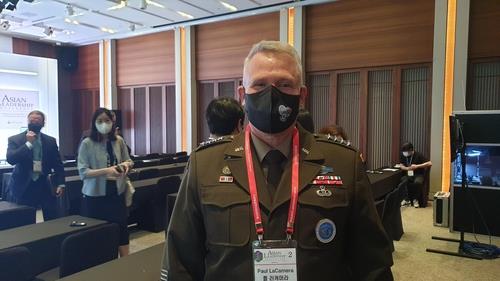 Asked what conditions the reclusive regime may consider before conducting a nuclear experiment, LaCamera pointed to a series of events, like China's "political meeting in the fall" in apparent reference to its Communist Party congress expected to reelect leader Xi Jinping for an unprecedented third term.

"I think there are a lot of things going on in the world. You got the Ukraine (war), you have Chinese having their political meeting in the fall," he said.

"Combat readiness is a top priority," he said.

During the forum, LaCamera portrayed the North Korean leader as presenting "multiple dilemmas across multiple domains."

"Protection as a war-fighting function is extremely important, making sure that we're adapting to what he's doing," he said. "We've got to figure out different ways to not just get at the arrows, but how do we get at the archer. And this is everything that we're doing on a day-to-day basis to react."

He stressed the importance of training but voiced concerns about troops' training areas having been reduced in line with the country's development projects.

"The challenge here is the economic growth and construction shrink some of our training areas. In those areas, we were able to train ... now we see progress, we see high rises, we see malls, etc," he said. "But we can't lose sight that we've got to have those areas to train. We've got to be able to train all of our systems."

When it comes to training, LaCamera said the allies should think about "all the domains" for security on the Korean Peninsula.

"We got to think about all the domains -- air, land, sea, cyberspace ... and quite frankly, the other one that's often overlooked is the human domain and information space," he said.

He cautioned that the North Korean leader is using the information domain "masterfully" to stop the allies' training.

"By complaining and making a big deal about what we do, he's trying to leverage that and get us to stop training," he said.

(LEAD) USFK commander calls N.K. nuke test 'not a matter of if, but when'

(LEAD) USFK commander calls N.K. nuke test 'not a matter of if, but when'