SEOUL, July 14 (Yonhap) -- A group of elementary school parents near the presidential office has filed a petition asking police to take steps to safeguard their children from noise and other hazards from constant rallies around the top office.

A series of rallies have been held near the new presidential office in Yongsan, central Seoul, in recent months, led by protestors ranging from a progressive labor union to a disabled advocacy group.

The parents' association of Yongsan Elementary School -- adjacent to the office -- submitted the petition to the Seoul Yongsan Police Station on Monday, demanding countermeasures, it said.

A similar petition was filed by hundreds of neighbors who live near President Yoon Suk-yeol's private home earlier, asking police to stop noisy protest rallies in their neighborhood.

Using loudspeakers, progressive protestors from the YouTube news channel Voice of Seoul have been staging daily rallies in front of Yoon's apartment building in southern Seoul, in retaliation for noisy conservative rallies in front of former President Moon Jae-in's retirement home in the southeastern city of Yangsan. 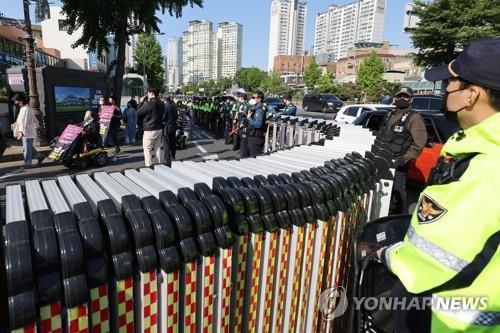