The 24-gigabit Graphics Double Data Rate 6 (GDDR6) adopts third-generation, 10-nanometer technology and boasts a data processing speed that is over 30 percent faster than existing products, the company said in a statement.

The new DRAM chip can process graphic images at a rate of up to 1.1 terabytes per second, which Samsung claims is the fastest in the world and equivalent to processing 275 full HD movies in a second.

In the future, it is also expected to be used in high performance computing, electric cars and autonomous vehicles.

As the new chip meets the JEDEC industry standards, artificial intelligence and graphics companies will likely adopt it easily, Samsung added. The JEDEC Solid State Technology Association is a semiconductor organization in charge of standardization of chips.

"Samsung will mass produce the new graphics chip at an opportune time to meet growing customer needs and will thus seek to take the lead in the next-generation graphics DRAM market," the company said.

According to market researcher Omdia, Samsung had a 38.9 percent share in the world's graphics DRAM market last year, followed by U.S. chipmaker Micron Technology Inc. with 33.3 percent and SK hynix Inc. of South Korea with 27.8 percent. 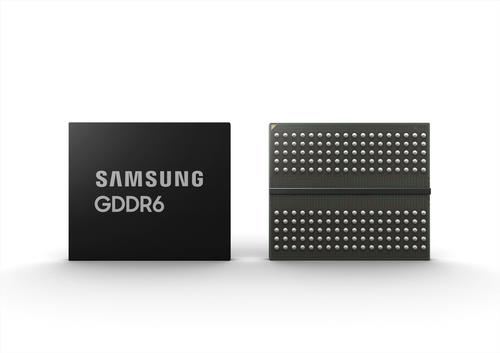