SEOUL, July 14 (Yonhap) -- The unification and justice ministries have denied that there was any legal basis for the previous administration's repatriation of two North Korean fishermen in 2019, according to a lawmaker's office on Thursday.

In 2019, the North Koreans confessed to killing 16 fellow crew members and expressed a desire to defect to South Korea. But the then Moon Jae-in government deemed their intentions to be insincere and sent them back to the North where they could have faced harsh punishment.

The Moon administration argued that the repatriation was similar to deportation under the Immigration Act.

But in response to queries from Rep. Yoo Sang-bum of the ruling People Power Party (PPP), the unification and justice ministries said that North Koreans are not subject to the act because they are considered citizens by law. 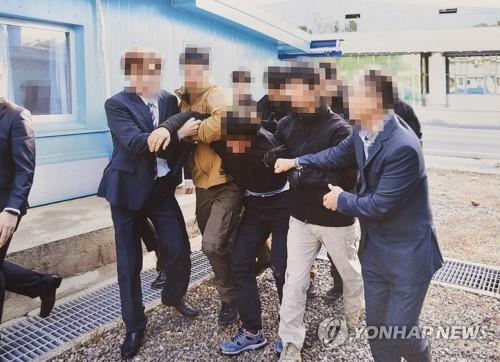 According to the lawmaker, the unification ministry said that the Immigration Act does not apply to the North Koreans who expressed a desire to defect to South Korea. It also said there are no deportation-related clauses in the North Korean Defectors Protection And Settlement Support Act.

The justice ministry also said that those who can be deported under the Immigration Act are foreigners, and North Koreans are not subject to the law because under the Constitution, they are considered South Korean nationals, the lawmaker said.

Deportation requires an order from the justice minister but no such order was issued, it said.

The unification ministry also said the presidential National Security Office practically led the repatriation and the ministry was later informed of the matter, according to Yoo.

"The Moon Jae-in government's repatriation of North Korean fishermen against their desire to defect is an act that clearly violates the Constitution and laws and is a serious abetting of North Korea's human rights abuses," the PPP lawmaker said.

Criticism of the repatriation escalated this week after the unification ministry released 10 photos of the North Koreans being dragged across the inter-Korean border and handed over to the North, apparently against their will.

Critics have accused the Moon administration of sending them back to their homeland where they could have faced harsh punishment in an effort to curry favor with Pyongyang so as to help move the stalled inter-Korean peace process forward.

The office of President Yoon Suk-yeol has said the forceful repatriation could constitute a "crime against humanity" and vowed to uncover the truth behind the case. Earlier Thursday, the PPP said it will consider launching a parliamentary investigation or an independent counsel probe into the case.