Son got the start and played for a little over 70 minutes at Suwon World Cup Stadium in Suwon, about 35 kilometers south of Seoul, three days after coming in off the bench in Spurs' 6-3 win over Team K League in Seoul.

Tottenham head coach Antonio Conte said he was pleased to start the preseason in South Korea, because his players went through two training sessions per day and play two matches, and still had time to enjoy themselves in the country.

"For us, it's very important to have stable of games in the middle of the (preseason) work," Conte said. "For sure, many players today were a bit tired, because we've had double sessions every day and it's not simple. For me, it's good, because when they're tired, they have to think and collaborate (with each other)."

Whereas the match against Team K League had more of an exhibition feel, Conte said Saturday's affair was "a real game."

"A game like this helps improve the team's mentality," Conte said. "Sevilla played a real game, and we did the same."

Son said days of even more taxing training sessions await Spurs once they return to London, but he insisted that's what preseasons are for.

"We have to go through some tough training to get our bodies ready for the new season," Son said. "The result tonight was a bit disappointing, but I think we still had a good performance overall."

Just under 44,000 fans were on hand for a rare opportunity to watch two clubs bound for the UEFA Champions League.

Ivan Rakitic scored for Sevilla, which dominated the possession without translating that into anything fruitful in the first half.

Son, who became the first Asian winner of the Premier League's Golden Boot in May, had Spurs' first shot attempt in the 16th minute, but his right-footed shot from outside the left edge of the box sailed wide of the far post.

Harry Kane had a goal wiped out because of an offside call in the 25th minute, a marker that would have come against the run of play. 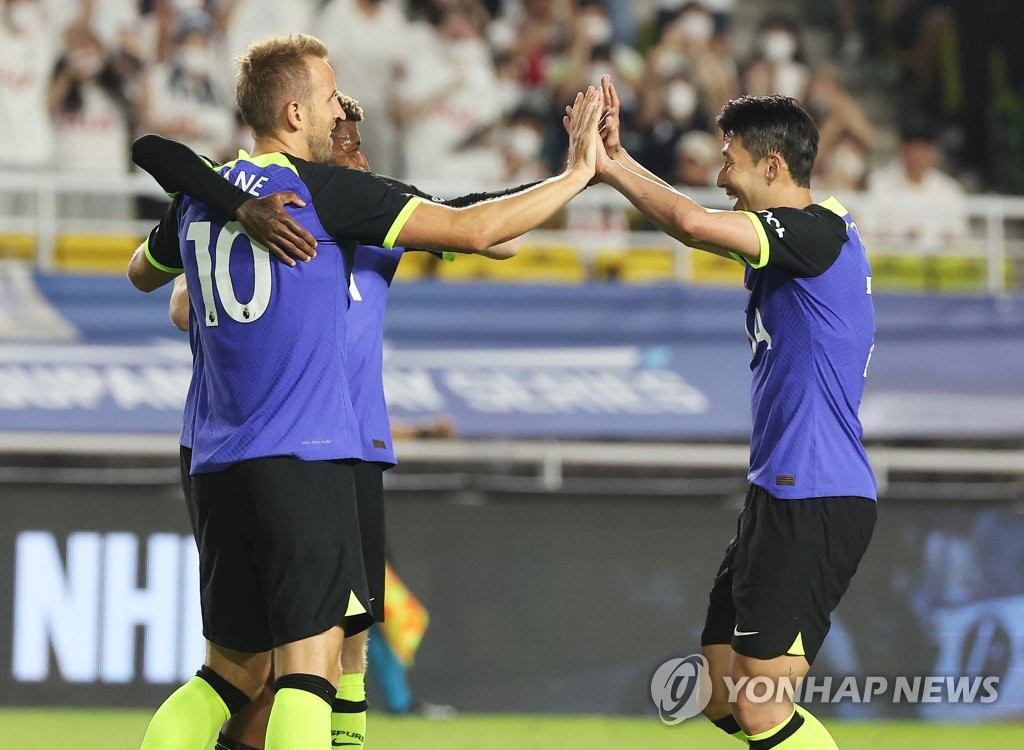 In the 29th, Sevilla's Papu Gomez tested Hugo Lloris in Spurs' net with a sharp-angle shot from the right side of the box.

Tottenham tried to push back a bit after the half-hour mark. Son's header off a cross from Ryan Sessegnon went straight to goalkeeper Marko Dmitrovic in the 32nd minute.

Sevilla came within inches of breaking the deadlock in the 38th minute, when former Tottenham player Erik Lamela struck the left post with his left-footed volley. 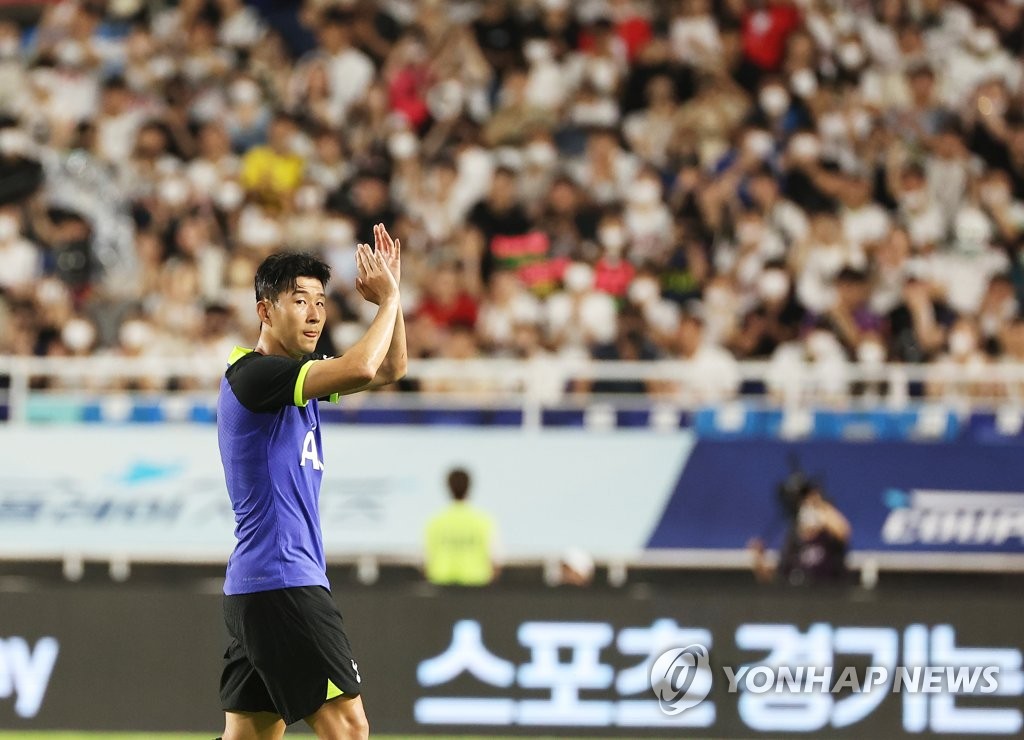 Tottenham's Pierre-Emile Hojbjerg nearly gift-wrapped a goal to Sevilla in the 42nd minute, with Rafa Mir picking off a careless backpass to start a fast break. But the Sevilla forward only managed to hit the left side of the net.

Tempers flared moments after the end of the first half, with some players getting into a shoving match before cooler heads prevailed. Late in the first half, Son's errant elbow struck Gonzalo Montiel in the face and left him bloodied, and Montiel appeared to have a few choice words for the South Korean as the players headed back into the lockers. 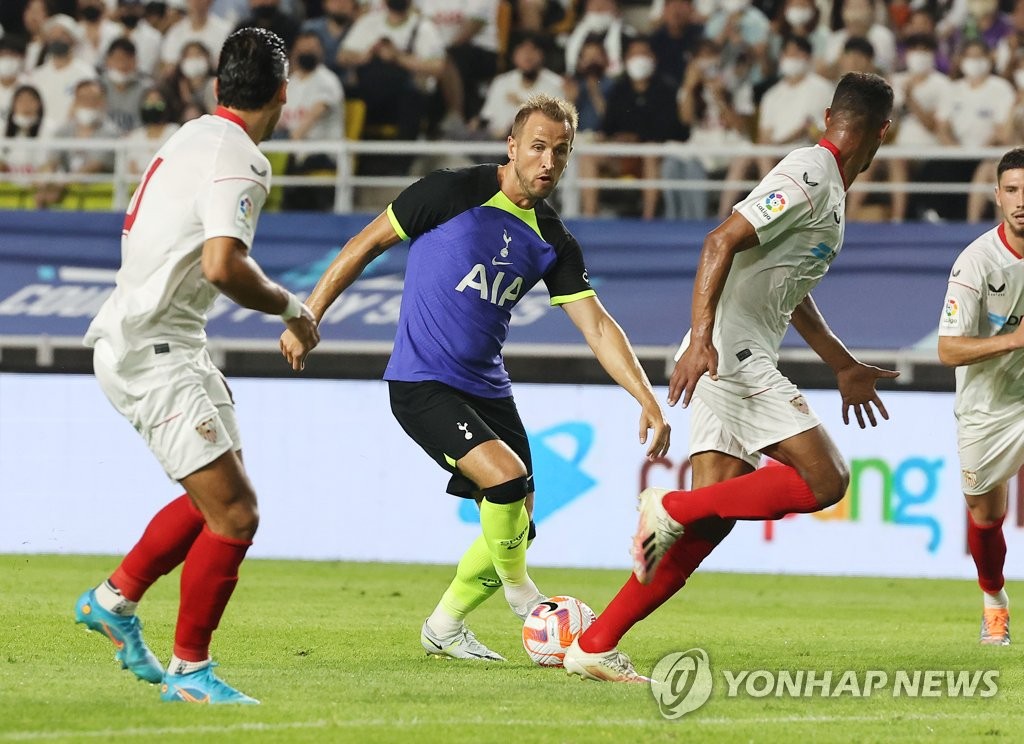 The pace of the match picked up on both ends in the second half, and the deadly Son-Kane duo connected for the match's first goal five minutes in.

Holding the ball just outside the penalty arc, Son made a desperate pass to Kane while falling down. Kane then slotted it home with his left foot, sending a heavily pro-Spurs crowd into a frenzy.

Son had a chance to score one for himself in the 55th minute, but his left-footed attempt from outside the box sailed over the target.

Ivan Rakitic leveled the score for Sevilla in the 64th minute, firing a right-footed shot home after Luismi Cruz teed it up for him just right of the arc.

Son was subbed out just past the 71st-minute mark, drawing a rousing ovation as Bryan Gil took his spot.

Ivan Romero nearly took advantage of a Tottenham turnover in the 87th but rolled his shot just wide of the left post. 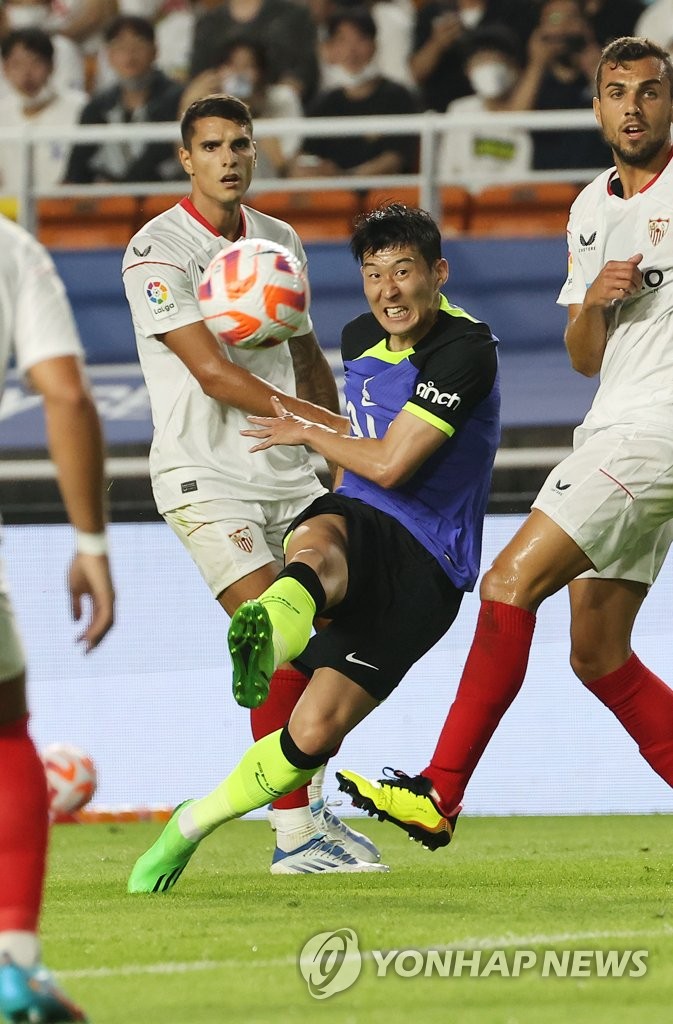 Sevilla FC head coach Julen Lopetegui said facing Tottenham was a great test for his side.

"We faced a team that qualified for the Champions League, and we had five or six reserve players on the field," Lopetegui said. "We executed the plays that we wanted to against such a strong team. Despite the result, I think we played a good match."

Rakitic, the goal scorer for Sevilla, also said he was pleased with the result and the effort considering the circumstances.

"This was our first game in the preseason, and we had the long travel from Spain. We trained really hard these last 10 days," the Croatian star said. "I think it was important for us to do hard work against a big team, even better for me to help the team with the goal."