SUWON, South Korea, July 16 (Yonhap) -- Son Heung-min has given himself a tough act to follow in the new season, having won the Golden Boot for Tottenham Hotspur in the 2021-22 campaign.

Can he possibly do better? It is a tough task, but that doesn't mean Son won't give it a try.

"Personally, my biggest goal for the new season is to play the game that I love even better than last season," Son said Saturday after Spurs played Sevilla FC to a 1-1 draw in a preseason match in Suwon, 35 kilometers south of Seoul.

"We have just a couple of preseason matches left, but we'll give more than our 100 percent to prepare for the new season," Son added. "We will make sure we're not going to let our fans down." 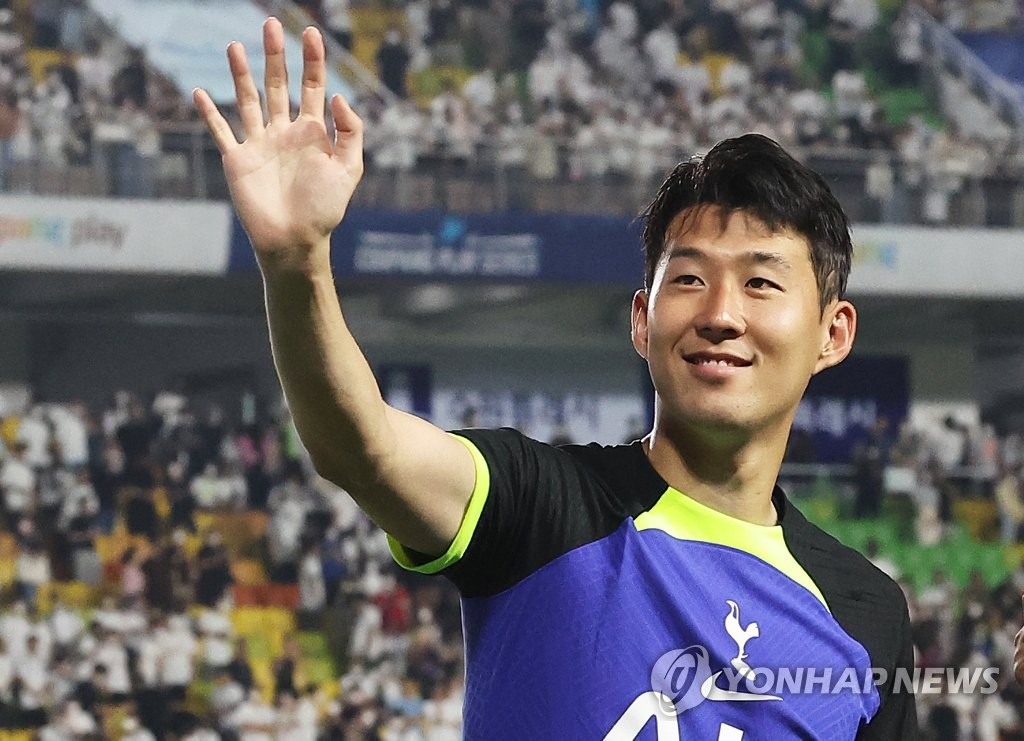 Son netted 23 goals last season to tie Mohamed Salah of Liverpool for the league lead. The South Korean star became the first Asian player ever to capture the Golden Boot.

Tottenham's first summer trip to South Korea with Son at front and center couldn't have come at a better time. Son had already been one of South Korea's most beloved athletes, and the Golden Boot catapulted him to a whole new level of popularity.

Son scored twice in Spurs' first match here, against Team K League in Seoul on Wednesday, after entering to a thunderous ovation from some 64,000 fans early in the second half.

On Saturday, Son got the start and assisted on Harry Kane's goal, before leaving the field in the 72nd minute, with about 44,000 fans showing their appreciation. 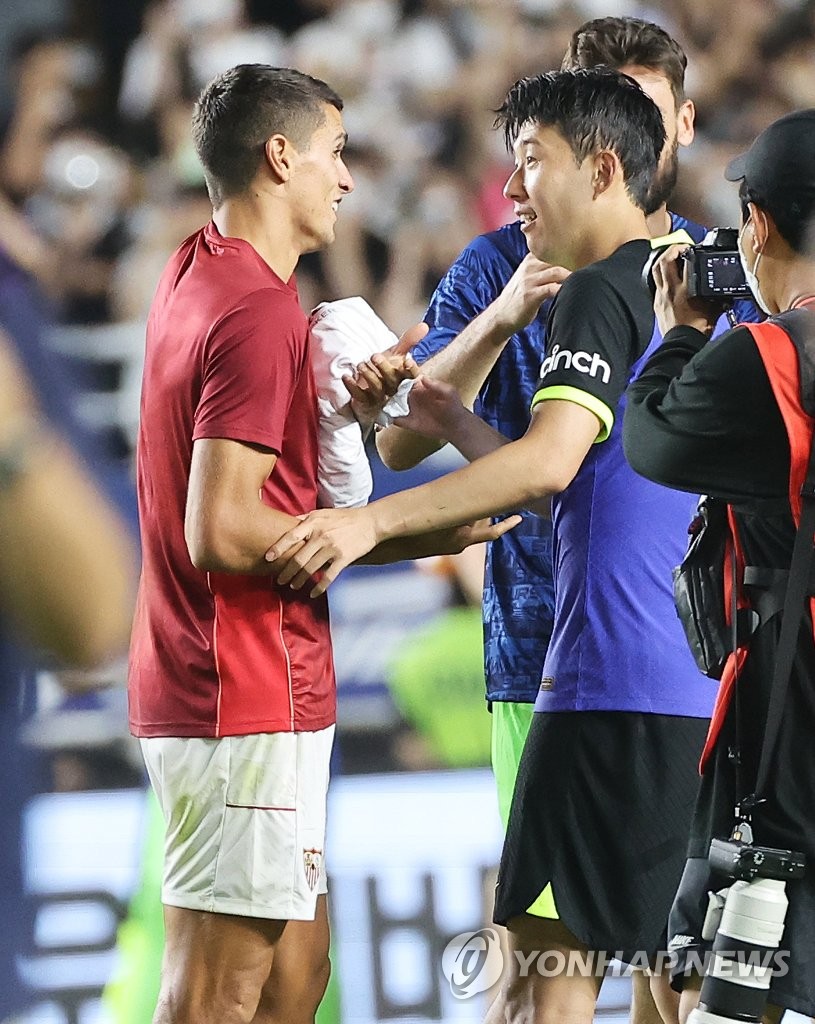 The feeling was mutual for Son.

"I don't think the words 'Thank you' can even begin to describe how grateful I am. I wonder if I even deserve this much love and support," Son said. "My teammates all enjoyed their stay here, and some said they'd love to come back to Korea for vacation. Even after we return to England, we will never forget about the support from our fans in Korea. We really can't ask for more. I want to thank you all for such a memorable week."

Son set up Kane's goal with a desperate pass that he somehow executed while falling to the pitch. Son admitted there was some luck involved on the play.

"I tried to pass the ball to Kane a moment or two earlier, but then I saw defenders closing in on him," Son said. "So I waited for him to get open again, and I fully intended to make the pass in the moment that I did. I was lucky that the ball was still at my feet as I was falling."

Son downplayed the significance of having two goals and an assist in two matches on his native soil.

"This time of the year, the key is to get your body ready for the new season," Son said. "This was essentially my first week of preseason. I am not yet 100 percent, but I was able to play good matches thanks to some help from my teammates." 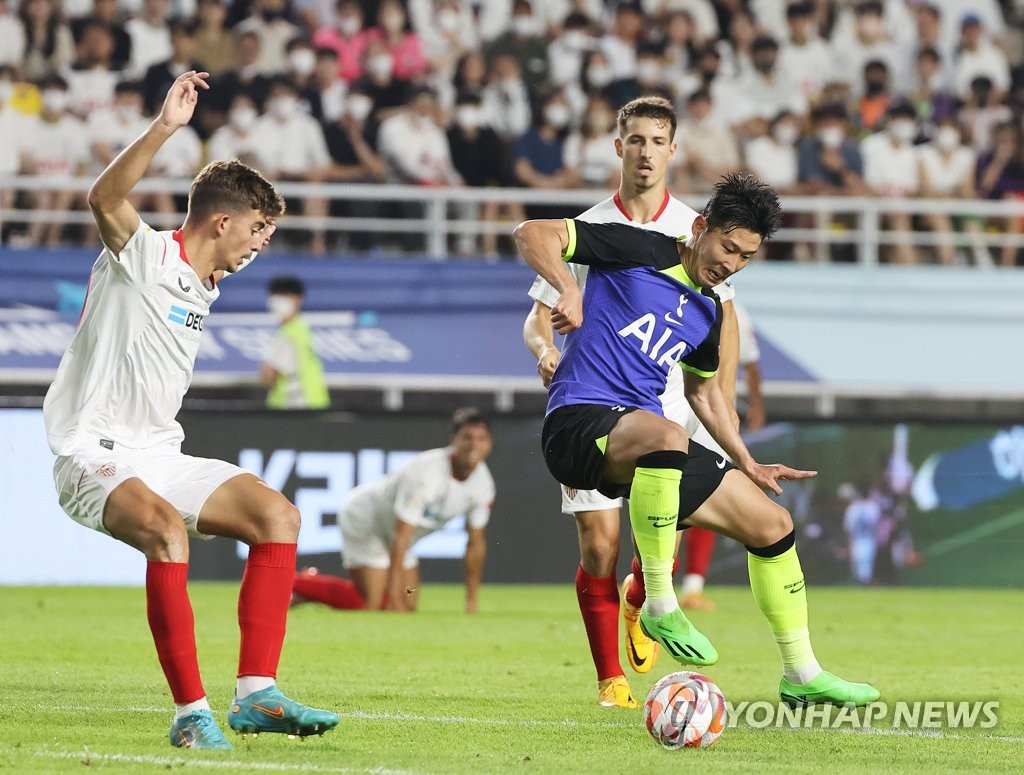 Son also found himself in the center of some pushing and shoving between the two sides right after the end of the first half. Son caught Gonzalo Montiel in the face with an inadvertent elbow, leaving the Sevilla defender bloodied. Montiel appeared to have some choice words for Son, but cooler heads prevailed in the end.

"Even though this was a preseason match, both of these clubs always want to win, and no one ever wants to lose," Son said. "We had some physical moments, but this is just a natural part of the game."

Son took his team out to a Korean barbecue place in Seoul on Thursday, and the club posted photos of players dining on grilled meat on its social media.

"I finally got to treat the lads to dinner, and that was a huge weight off my shoulders," Son said with a smile. "I was so glad to see the guys enjoy it. I'd worried so much about it, even as I was organizing the dinner. I wish I had more time to show them around the country, but we didn't come here to go sightseeing. Hopefully, we'll have an opportunity to do that in the future." 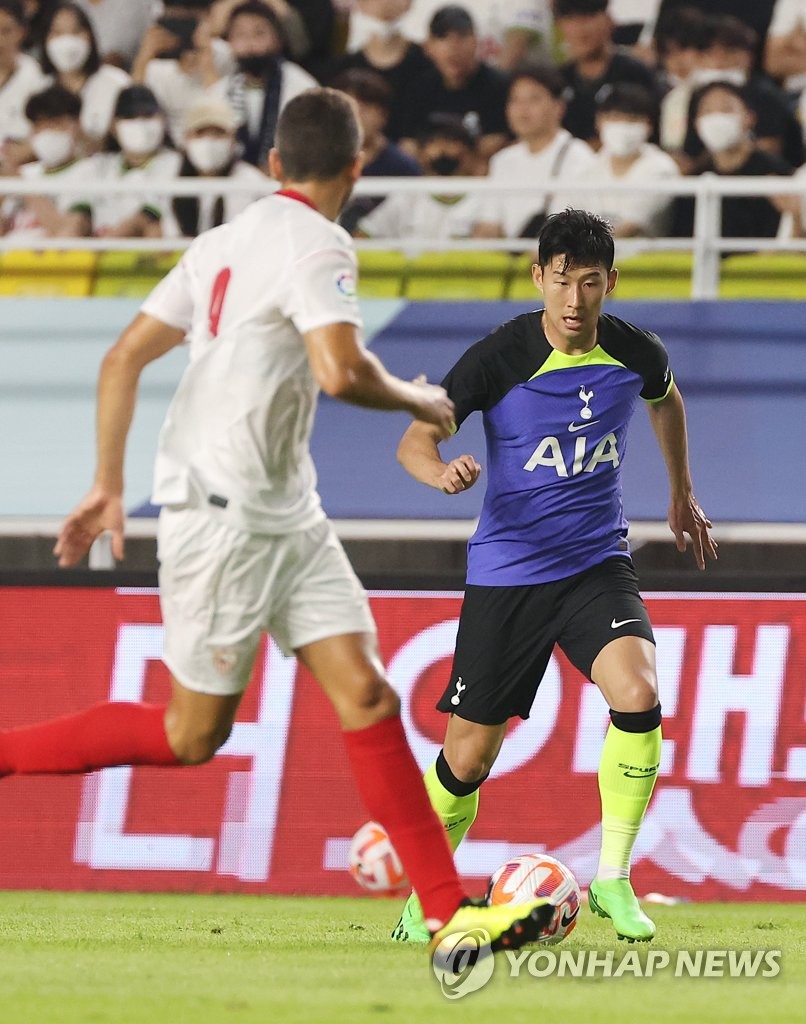 (LEAD) With Golden Boot in tow, Sonny looking to outdo himself in new season

(LEAD) With Golden Boot in tow, Sonny looking to outdo himself in new season