SEOUL/TOKYO, July 18 (Yonhap) -- The top diplomats of South Korea and Japan agreed Monday on the need for an early resolution of the long-running dispute over Korean victims of wartime forced labor.

Foreign Minister Park Jin and his Japanese counterpart, Yoshimasa Hayashi, held talks in Tokyo to discuss ways to mend soured bilateral ties and settle historical feuds stemming from Japan's 1910-45 colonial rule of Korea. Park arrived earlier in the day in his first official visit to Japan since taking office in May.

During the talks, Park said the Seoul government will make efforts to draw "a reasonable solution" related to the force labor issue and the two sides shared the view that the issue needs to be promptly resolved, Seoul's ministry said in a release. 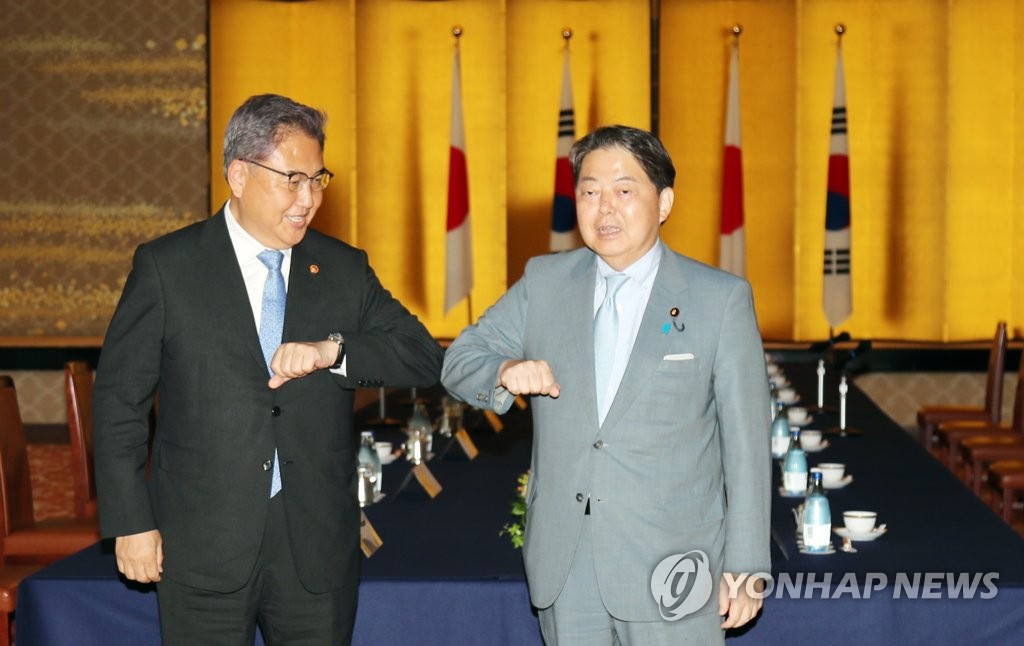 In 2018, South Korea's top court ordered Mitsubishi Heavy Industries Inc. and Nippon Steel Corp. to compensate Korean forced labor victims, but the companies refused to pay them, claiming all reparation issues were settled under a 1965 accord aimed at normalizing bilateral diplomatic relations.

The problem of how to compensate Korean forced labor victims has taken new urgency, as South Korea's Supreme Court is expected to hand down its final verdicts on whether to allow the liquidation of assets held by two Japanese companies as early as in August.

Tokyo officials have called on the Seoul government to come up with reasonable solutions to avoid liquidation of the Japanese firms.

South Korea's new government-private body, launched earlier this month, is still working to come up with specific proposals on ways for a resolution of the thorny issue. 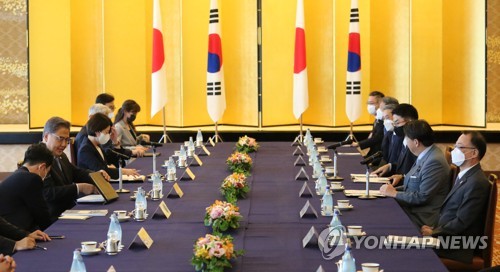 During the one-on-one, the ministers also discussed the latest security situation on the Korean Peninsula and agreed to sternly deal with North Korea's additional provocations, while leaving the door to dialogue open to pursue "a flexible, open diplomatic approach" toward Pyongyang, according to the ministry.

Park and Hayashi, who joined a trilateral session with U.S. Secretary of State Antony Blinken on the sidelines of a Group of 20 meeting in Bali in early July, reaffirmed their commitment to bolster the trilateral cooperation on issues related to North Korea, it added.

The conservative Yoon administration has repeatedly stated a commitment to improving Seoul's relations with Tokyo in tandem with a push for bolstering trilateral security cooperation involving Washington against growing threats from Pyongyang.

Speaking to reporters just before his departure, Park said the two sides plan to have "comprehensive discussions" on various pending issues, including an intelligence-sharing pact.

He earlier raised the need for Seoul and Tokyo to "normalize" the General Security of Military Information Agreement (GSOMIA), which is widely regarded as having been underused since 2019, when former Moon Jae-in government decided to "conditionally" put off its expiration in protest at Tokyo's unilateral export curbs against Seoul.

It remains uncertain whether his trip will produce a breakthrough in efforts to put the GSOMIA operation back on normal track and mend Seoul-Tokyo ties long strained due to history and territorial rows.