SEOUL, July 18 (Yonhap) -- The government of President Yoon Suk-yeol is clashing head-on with the previous administration of President Moon Jae-in over the 2019 repatriation of two North Korean fishermen against their will, indicating what could be the start of a wider investigation into alleged irregularities committed by Moon and his government.

The North Korean fishermen were captured and repatriated by the Moon administration in November 2019 after they confessed to killing 16 fellow crew members aboard their vessel in the North.

The then government said it determined that the men posed a threat to the safety of South Koreans and that their expressed desire to defect was insincere. But the conclusion was challenged by some politicians and civic activists who accused the Moon administration of ignoring due process and laws to repatriate the fishermen in hopes of currying favor with Pyongyang. 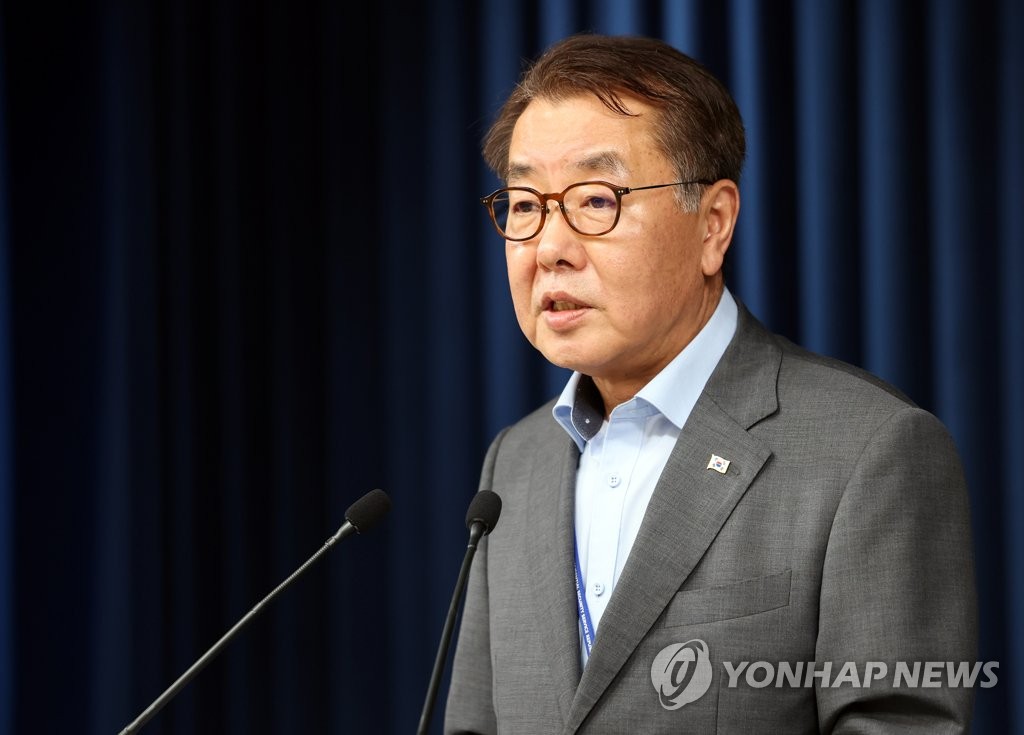 On Sunday, the tensions between the former and current governments appeared to come to a head when former National Security Adviser Chung Eui-yong released a statement denying any wrongdoing in the handling of the repatriation, and Choi Young-bum, senior presidential secretary for public relations, hit back by urging the previous administration to refrain from political offensives and to cooperate faithfully with an ongoing investigation into the case.

While Chung characterized the fishermen as "rare, grotesque killers" who are not protected as refugees even under international law, Choi said it was a "serious problem" they were given such a label without a proper investigation.

Chung denied the North requested the repatriation first, claiming the Moon government checked with Pyongyang to see if it would accept the fishermen. But Choi countered that the previous government "sent them back to the field of death according to the North's wishes."

The doubts surrounding the circumstances behind the repatriation were reinforced last week when the unification ministry, now under the Yoon administration, released 10 previously unseen photos of the fishermen appearing to resist as they were handed over to North Korean authorities inside the inter-Korean truce village of Panmunjom in November 2019.

The photos set off a political firestorm, with the presidential office slamming the repatriation as a potential "crime against humanity" that required a thorough investigation by the new government.

In addition to Choi's remarks, the presidential office released a statement Sunday that targeted its criticism at the Moon Jae-in government's Cheong Wa Dae.

"President Moon Jae-in, who emphasizes human rights and the rule of law, previously called for warmly embracing foreign crew members who killed our nationals on the Pescama because they were fellow countrymen," the presidential office said, referring to when Moon served as a defense attorney.

Both sides have claimed to be open to either a special counsel probe or parliamentary investigation into the repatriation.

"I have nothing to hide," Chung said. "But the reason and process behind the current government's reversal of the established decision, despite the absence of new facts, should also be determined through the special counsel probe and parliamentary investigation."

Choi responded the Yoon administration had no reason to avoid either investigation but noted he was "curious as to whether the opposition party believes it can gloss over the truth by relying on its majority in parliament."

To add to the controversy, the unification ministry said Sunday it secured video footage of the repatriation.

If released, the footage is expected to cause even greater repercussions than the photos.