SEOUL, July 18 (Yonhap) -- A group of lawyers on Monday filed a complaint asking the prosecution to investigate former President Moon Jae-in on attempted murder charges in connection with the deportation of North Korean defectors in 2019.

However, the Moon administration sent them back to the North, where they could face harsh punishment, saying their intentions were insincere. The move stoked suspicion the Seoul government tried to repatriate the defectors in an effort to curry favor with Pyongyang.

On Monday, the Lawyers for Human Rights and Unification of Korea (LHUK) filed the criminal complaint against Moon as an accomplice on charges of attempted murder, illegal arrest and abduction, abuse of power, destruction of evidence, and violation of the Act on Punishment of Crimes under Jurisdiction of the International Criminal Court.

"Former President Moon is the person directly and finally responsible for the crime against humanity," Lee Jae-won, chief of the LHUK, told reporters in front of the prosecution building in southern Seoul.

Criticism of the decision to repatriate them rose further after the unification ministry released photos last week showing the two refusing to cross the Military Demarcation Line at the truce village of Panmunjom while being taken to be handed over to North Korean authorities.

The group further argued the two fishermen had submitted a declaration of intent to defect in their handwriting, directly contradicting former President Moon's argument. 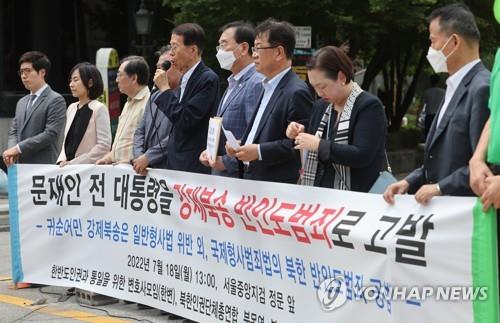