SEOUL, July 19 (Yonhap) -- President Yoon Suk-yeol said Tuesday he believes the country has "waited long enough" for a strike at Daewoo Shipbuilding & Marine Engineering Co. (DSME) to end, hinting at the possibility of using force to break up the prolonged walkout.

Subcontract workers at DSME have been striking since June 2, leading to a standstill in shipbuilding operations and causing up to hundreds of billions of won in losses for the company. 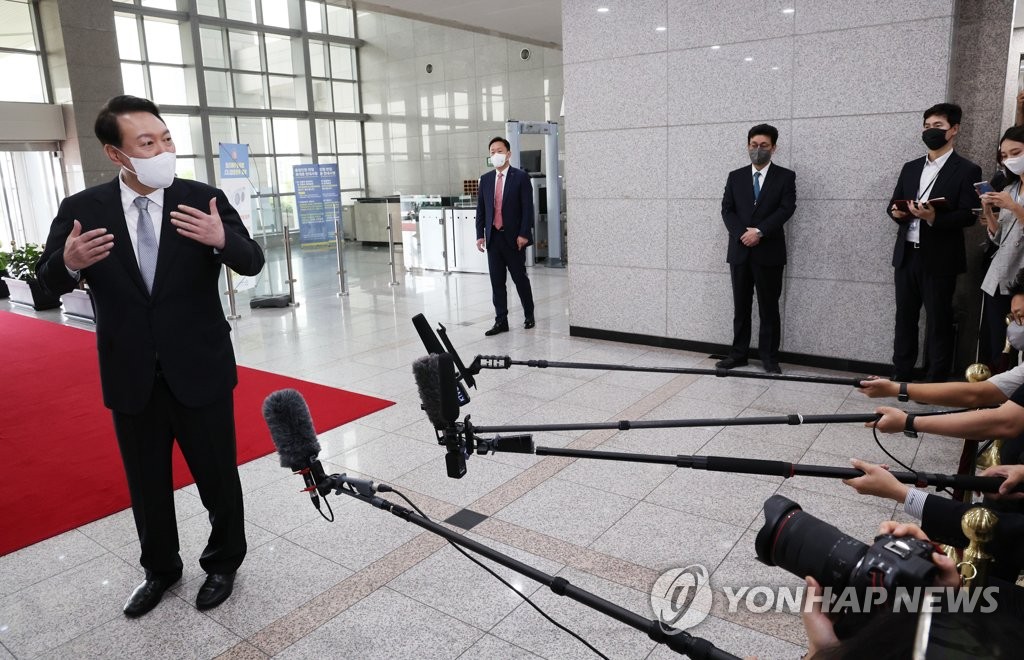 "When it comes to industrial sites and labor-management relations, illegal actions by either labor or management should not be left unattended or tolerated," Yoon told reporters when asked if he plans to use force to end the strike. "Besides, I think the people and the government have all waited long enough."

Yoon revisited the issue during a Cabinet meeting later in the day, saying the walkout is causing "enormous" damage to the shipbuilding industry and the economy.

"The people will no longer tolerate the use of illegal and threatening means," he said, calling for a strict establishment of the rule of law at industrial sites. "The economy is currently in a very difficult state. We must all join forces and strive to overcome this crisis."

Yoon had made similar remarks Monday after the government held an emergency meeting to discuss measures to cope with the strike. The government later issued a statement warning of a "stern" response should it continue without a resolution.

"Isn't it the president's job to mediate sharply divided social issues and to put priority on people's lives and safety?" Rep. Park Hong-keun, floor leader of the DP, remarked to reporters.

"He should show his ability to resolve the issue in a safe manner and to make both sides compromise rather than resolving the issue through force."

The liberal party said it will set up a separate task force aimed at resolving the issue.

Yoon is scheduled to meet with U.S. Treasury Secretary Janet Yellen at his office later Tuesday. The meeting is widely expected to touch on possible additional sanctions on North Korea.

"We won't be talking about an agreed-upon agenda," Yoon told reporters, "but rather about the details of expanding the South Korea-U.S. alliance from a political-security alliance to an economic security alliance -- about making progress on the agreement I reached with President Biden when he last visited South Korea."

Yoon's approval rating has steadily declined in recent weeks to hover just above the 30 percent mark.

When asked what he thinks is the reason, Yoon asked back, "Isn't the reason well known by the press?

"If we knew the reason, any administration would have done well," he added. "We just keep working hard."