The company announced in June that the new bivalent coronavirus booster candidate, named mRNA-1273.214, has shown a superior neutralizing antibody response against omicron variants when compared with the company's original mRNA-1273 vaccine.

Francesca Ceddia, senior vice president of respiratory vaccines at Moderna, said the company was currently preparing to seek approval for the new vaccine from regulatory authorities across the world, including in South Korea.

"With respect to the approval of our bivalent vaccine, we are, as we speak, preparing the submission to the Korean regulatory authorities, which would happen over the next few days," Ceddia said at a press conference at a hotel in Seoul.

Ceddia added Moderna is committed to making the vaccine available by August, provided that it receives regulatory authorizations from different countries. 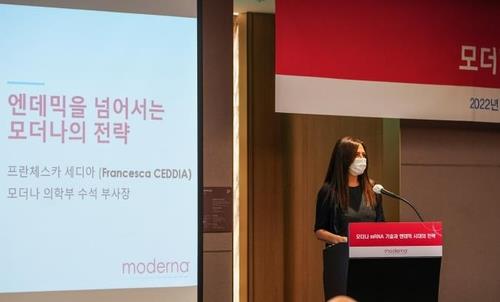 "We believe we have a very compelling solution with the mRNA-1273.214 vaccine, which (will be) soon available and able to protect against BA.4 and BA.5 (omicron subvariants)," the senior vice president said.

South Korea has seen a marked increase in infections since end-June as the omicron subvariant BA.5 spreads during the summer vacation season. The daily count hit over 10,000 on June 29 for the first time in about three weeks before jumping to over 20,000 on July 9 and soaring to over 73,000 on Tuesday.

Paul Burton, Moderna's chief medical officer, advised people currently eligible to get a booster shot to receive it as soon as possible, as opposed to waiting until new vaccines come out.

"These are not mild diseases. They continue to cause very high rates of infection, hospitalization and even deaths," Burton said, adding that he believes there will be a need for additional vaccinations in the autumn and winter.

Burton noted that Moderna was envisioning getting ahead of the coronavirus and control it by bringing "mRNAs for different variants of concern together into a single vaccine."

He also said Moderna wants to collaborate with medical centers and academic commissions in South Korea, saying the country is an "extremely important fundamental part" of the company's future.